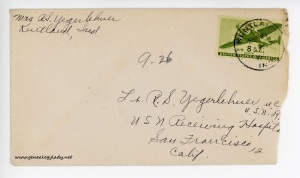 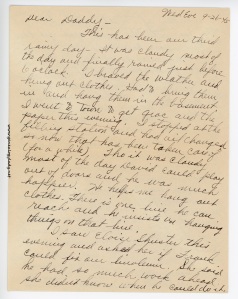 This has been our third rainy day – It was cloudy most of the day and finally rained just before 6 o’clock. I braved the weather and hung out clothes. Had to bring them in and hang them in the basement. I went to town to get groceries and the paper this evening. I stopped at the filling station and had oil changed so now that has been taken care of (for awhile). Tho’ it was cloudy most of the day David could play out of doors and he was much happier. He helps me hang out clothes. There is one line he can reach and he insists on hanging things on that line.

I saw Eloise Shuster this evening and asked her if Frank could fix our linoleum. She said he had so much work ahead she didn’t know when he could do it.

[page 2] I wonder if that will be a job for you to do when you get back. I know you could do it – think I could even do it myself if I could find something sharp enough to cut the linoleum with – however I won’t try it. I have enough to keep the house clean – that is I have some house cleaning I want to get done. I was amused at John the other day – he said we should have gotten you to put the storm windows on. Some of these storm windows have been on two years. I would like to get them taken off so I can wash them and the windows. Dorothy said some of theirs hadn’t been off for two years. It’s early yet for storm windows. That is to put on the ones that are not already on. I was thinking about the roof guttering – but no use to clean them out until the leaves stop falling

[page 3] and the trees are still full.

I have been thinking about the space on our “back porch.” It can be used for a laundry. There is enough room there for the Bendix and ironer. If we had a partition thru the garage that half could be heated. I am gong to figure on what it would take to do that. The basement is the wrong place to have a Bendix – because of the way it operates. Even if clothes have to be carried to the basement from upstairs to be hung up there are not as many steps to the basement, and clothes are hung out of doors about 9 months out of the 12. I think the ideal place for us is that space I mentioned. That way we could take the ironer out of the kitchen and put the refrigerator where the ironer now stands. Now I think I have a good idea here – maybe you won’t agree. How’s the office plans coming along? I trust by now you have my suggestions.

John says they are ready to start in their second yr. Latin book 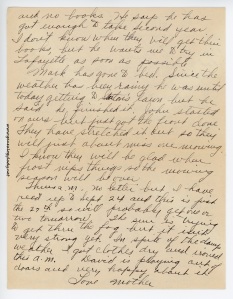 [page 4] and no books. He says he has got enough to take second year. I don’t know when they will get their books, but he wants me to try in Lafayette as soon as possible.

Mark has gone to bed. Since the weather has been rainy he was until today getting to Staton’s lawn but he said he finished it. John started on ours but just got the front done. They have stretched it out so they will just about miss one mowing. I know they will be glad when frost nips things so the mowing season will be over.

Thurs. a.m. No letter but I have rec’d up to Sept. 24 and this is just the 27th so will probably get one or two tomorrow. The sun is trying to get thru the fog but it isn’t very strong yet. In spite of the damp weather I got clothes dry and ironed this a.m. David is playing out of doors and very happy about it.