Today I made the effort to get back to work on German—with some success.  I was up at about 7:30—Debbie wouldn’t let us sleep any longer than that. I was at my desk by 8:00. But the going was slow. I was sleepy and lethargic. I did make some progress in the morning however. About one I relaxed—almost was falling asleep when Bonnie called me to lunch. Shaved after lunch, then got back to German. Late in the afternoon Alan called—he still doesn’t realize that we knew Pat was her[e]—he obviously has taken her back to Hamilton Ontario—he made some excuse for not being in church yesterday. I napped late in the afternoon—then worked on German from 5-6:30, watched CBS—had supper. Wrote letter to Levon King about the VW; spent the rest of the evening on German; bathed; read; OBLO 12:45.

It was hard getting started this morning. Up at 8:25—caught the weather report on TV—more rain today, at times it really poured. I was able to get some German done, but not too much. We had a late lunch, after which I shaved, then went to the church to change the wayside pulpit—and stopped into the town clerks office to inquire about changing our voter registrations. Came home and got back to German. Late in the afternoon Alan Fredrick came over; he read German with me and graded a lesson. He left about 6:15. We had supper, then Bonnie left to go to Becky Bussey’s baby shower. I continued on German through the evening, but at 9:30 watched the Mariner 6 pictures from Mars on TV. Watched 11 o’clock news, and from 11:30-12:00 a program on the Mariner; the photos are of good quality. Bathed; OBLO, 12:46.

Again this morning we were late in getting up—not until almost 10:00. Had breakfast, but was diverged from German when the mail came—spent some time with Newsweek—had a late lunch and then got to work on German. Bonnie  went shopping with Becky Bussey. I stayed home with Debbie and German. Bonnie was late getting home—not until after 6:30. I got supper +  put Debbie’s food on. Bonnie got home, we had supper. Then relaxed—I read a little further in Updike’s Couples. Then we went on a walk. Strolled down Bear Skin Neck. Very crowded; we stopped in about 3 or 4 shops—went all the way to the end. Home by 9: 30. Bathed, Θ+  —had a drink; then I went back to German—also watched TV news—a few more pictures of Mars; read OBLO, 12:20. 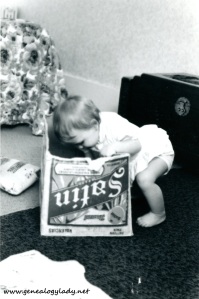 Was awake by 9:00—don’t recall exactly when. Stayed in bed reading Updike’s Couples for a while, got up, had breakfast, then got to work on German. Interrupted for a while with the mail. Worked again on German. We had a late lunch—decided to a cook out this evening—and to ask Busseys over. After lunch I shaved, then went back to studying. Made some progress in the afternoon—Bonnie was off shopping—Debbie played in the bedroom while I worked. Late in the afternoon Bonnie called Alan to forbid him to tell Diane’s parents that she is staying with us. We’ve finally contacted Busseys about supper and they arrived after 6:00. After supper we came on inside, But they went home very soon. I then got back to work on German. Rather weary, didn’t make so much progress but did get a lesson done in German. Watched 11 o’clock news; bathed; read in Couples in bed; LO 12:52.

Up by 9:30 after Θ. Had breakfast, then got to work doing some reading for the sermon. Mail today consisted of Life magazine.  I spent some time with it, mainly on the article about Ted Kennedy—his fateful right turn onto Dyke Road could hardly have been accidental. Finally got to work on German. We had a late lunch, I shaved, then got back to translating Noth. I spent the afternoon on German, with the twins next door (15 months old) bawling. So glad that Debbie cries so seldom, plays so quietly—entertains herself quite well.  Bonnie went sound asleep late in afternoon—I went about getting supper about 6:30—didn’t use the liver that had been thawed—smelled bad. We had to make do with other odds + end.  Studied all evening, after [???] more old magazines. Almost finished another lesson in the grammar. OB to read; LO 12:55.

Very shortly after LO, got up to bathe. While I bathed Bonnie unloaded all her negative feelings about our European plans—it depressed me greatly—I could find nothing to say; finally, back in bed as it became increasingly obvious that the trip would not work I went to pieces—wept bitterly, uncontrollably. I can never recall having done so before; finally we talked about our feelings. Θ around 4 AM—finally got to sleep. Up about 8:00 or 8:30 feeling lousy—I was in a dull stupor most of the morning—I had resigned myself to having to cancel the trip. Took pictures of cats in tree box  After lunch and a HAIRCUT—and after shaving, called Uhlinger  to tell him we are staying in Rockport. Rest of the afternoon spent mostly preparing for sermon. Got started before stopping for supper. Finished after supper; did the bulletins. Busseys came over for water. When they left worked further on service—listed [sic]  to radio, bathed, off to bed, lights out about 1 AM.

Up about 8:30—very sleepy. Breakfast—revised sermon during coffee; shaved, dressed, off to church; preached on 3rd Isaiah. Home about 11:15. We fixed lunch. Read some in Couples  I then planned to nap. But didn’t have any luck so I got to work on German. About 2:35 Saddie Orne arrived to babysit. About 15 til 3 Bonnie +  I left for the Den Mar nursing home—I led the simple short service. Several in the congregation showed up to help with the singing—including Alan Federick + Diane. They came back to the parsonage. We had iced tea together in the backyard. They left shortly before 6:00. I worked some more on German while waiting for supper. After supper I worked on German, “took”  the test which I did so poorly on in April. Did much better but still not good enough. Also help Bonnie with getting the back room ready. Stopped to bathe about 11:45; read Couples in bed; LO 12:46.