Up—i.e., awake at 7:15. We got Debbie from the car and brought her into the tent with us—and very shortly we began the process of getting ready to leave. We had the car all packed by 8:15—and on the road. We had breakfast in Tilton, N.H., at Dot’s restaurant. The rest of the day we spent on the road. The color in the trees is brilliant. We drove north to Littleton, then headed west in Vermont. We found Vermont most lovely. We headed south eventually, took 89 to 93 to come home (then 114 to 128)  Debbie was a very good traveler today—no fussing at all, and no car-sickness. We encountered traffic—heavy—at Concord on the way back. We got home about 6:00; had supper, watched CBS news. No energy to do anything in the evening. Had several phone calls—Bussey, Bamforth, Alan Federick. Played with Debbie; didn’t try to study; shaved, bathed OB, Θ+, LO by 10:20.

Did[n’t] make it up til about 9:30. Very weary after the hectic Sun-Mon. Didn’t get any studying done in the a.m. Read several articles in New Republic; went to the church to add notice of service tomorrow to wayside pulpit. Late in the morning had visit with neighbor + her daughter Ezra—she + Bonnie discussed sewing. Finally I got to work about noon. Had lunch around 1:00. Watched world series game #3, but after lunch got to work. Twice I checked in on the game—in efforts to keep awake. But I made headway with the Hebrew. Late in the afternoon looked through the paper when it arrived. Started working on supper about 5:45. Had supper, watched CBS news. Got back to work—telephoning to Jim Bussey, George Gabin, Alan Federick. Was able to get my Hebrew translation done, but no typing. Stopped to bathe about 11:00. Had snack too; read in bed. LO 12:05.

Vietnam Moratorium Day. Up about 9:00—after breakfast my main concern was to get my Hebrew translation typed—and this took the morning. I shaved at noon, while watching the TV news—getting early reports on the Moratorium, mostly favorable. After eating, finished typing, then prepared to leave for Boston. Left around 2:00, stopped at Wesley church in Gloucester to do more mimeographing of religion leaders’ statement on Vietnam. Arrived at BU shortly after 3:00—it was almost deserted, everybody at Boston Common for the moratorium rally; had seminar from 4:15 on; But had to leave about 5:20. Got home—no traffic—by about 6:20. About 6:40 left for the Universalist church; participated in the Moratorium Service. When I got home we had supper; we were babysitting for Matthew Bussey; didn’t do to[o] much in the evening; had snack at 10:30 with Busseys. Watched 11 o’clock news—bathed—watched CBS news report on moratorium, 11:30 – 1:00. OBLO 1:02. 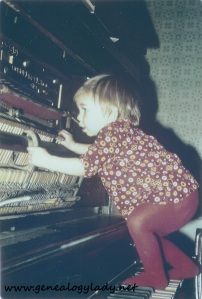 Debbie 14 months old   Up before nine. Had breakfast, then we got ready and went to Beverly to see VWs—we agreed to take a green one that has just come in. We got back to Rockport after 11:00.  There was a long letter from Pat Harry. Before lunch I read some in the New Republic. During lunch, Debbie seemed pretty lethargic—didn’t want to eat. So we took her temperature: 102.2. Bonnie called Dr. Kline’s office, and after I shaved we went right over. He saw her in not too long a time. Nothing serious. I left Bonnie at the hospital, brought Debbie home, gave her an aspirin, put her to bed. Watched the locker room aftermath of the world series game on TV—NY Mets won. Worked on Bible class lesson. Called Allen asking him to bring Bonnie home. I fixed supper. ^ fed Debbie; took 2 pictures ^ Bonnie was late getting home because Alan had dozed off; he ate hurriedly with us, then left has Bible class arrived. 7 in attendance; wrote to Pat Harry after they left. Played with Debbie—who isn’t feeling to[o] well, but fever down; bathed; OB read LO 11:47.

Up about 9:20. After breakfast I set to work on my sermon. When the mail came I stopped to read letter from mother and to glance Life magazine. About 12:30 Mrs. Sutton came over to see details about the car. After we had lunch I wrote letter to Mr. James S.  Frank, who will be preaching here next week. Then back to the sermon while Bonnie went to work. Debbie played and slept in her apartment. After finishing the sermon I typed the bulletin and went about getting supper ready. Alan Federick arrived about 6:40. We watched CBS news. Bonnie got home about 7:15—and about 7:30 we ate supper—then Alan and I went to the living room. We talked for quite a while about the war. He left for home by 9:30. Then Bonnie and I played with Debbie in her apartment. I was too weary to bathe.  Off to read in bed at 10:20. LO,  11:15.

Up shortly after 8:30. After breakfast, shaved. Then got to work on Aramaic. I was successful in getting quite a bit of studying done today—although I’m still pretty far behind. I must keep at it for several days. We had a late lunch after Bonnie got home from shopping. Then I got back to studying. About 4:00, when I had reached a stopping point, I went down to see Lucy Patience, whom I hadn’t seen in two weeks. Stayed there for almost an hour and a half. Her brother had given her a color TV—so we watched the last part of Majority of One. I then went for milk and did more studying before supper. We watched NBC news during supper (No CBS on Sat.)  My evening was spent getting ready for tomorrow in one way or another: preparing service; mimeo work. Straightened up study; bathed. OBLO, 12:25.

Up shortly after 8:00. Breakfast, shaved—my “class” arrived here at the house at 9:30: Karen Haskell + Billy Elwell. This was over about 10:30—then I went to the church. Preached on Rich Young Ruler (Part II)  Home by 12:30. We fixed lunch. Then I got a little studying done. About 2:30 we left for Loyd Starrett’s home: we signed our wills. Then Bonnie left and I stayed for the meeting of the youth group steering committee. When I got home about 4:30 I cleaned out the car; about 5:00 the Suttons arrived to take it—paid us $550. Then we fixed supper and I got back to work. Bonnie went to the first meeting of the couples group—but I stayed home to work on Aramaic—made progress, but not as much as I wanted. Margaret Riley called about Alan—she reports that he admits to drinking heavily again. I called Don McGaw for an appointment for Alan. Stopped to bathe about 12:30; OBLO 1:21.