Up shortly before 9:00. I shaved while Bonnie went to Richdales for bread. After breakfast I wrote a letter to the Gloucester Daily Times, drawing attention to the drug education program which Project NUVA is presenting (sponsored  by C.A.M.P.) on July 15 at Wesley church in Gloucester—took it to the P.O. Unfortunately this was one of those days when lethargy seemed to have the upper hand. This combined with noise all around the house, kids and neighbors, kept me from making much progress—trying to get a good start in Gunkel’s The Legends of Genesis. About mid-afternoon I decided to go down to the church, and I did find peace and quiet there. So I did make some progress. I came home after six; we had supper, then about 7:30 we took Debbie down to Kay Patriquin, then went to see the film at the N.S. Theatre in Gloucester: Woodstock—a color documentary on last year’s Woodstock rock music festival. It was an excellent film, very interesting—although not being a fan of much of the music, some sections were overly long. It grants very clear insight into a youth culture that has developed in our nation—so distant, alienated from the silent majority or what have you; we got home, after picking up Debbie, c. 11:30. Bathed, OBLO about midnight.

Up after 9:00. Had breakfast—went to the church to read. It’s much quieter down there. I stayed until about 12:30. Came home, had lunch, then returned. When I got there I found that the Kramer boy had his electric guitar all set up, but he was no where to be seen, so I resigned myself to the fact that he was probably going to be returning—and he did. The sound was deafening, so I decided to leave. I went to the Rockport Public Library, hoping that there might be a quiet corner there—but no luck in being able to really concentrate. So I came on back home, continued reading in Gunkel’s Legends of Genesis, which I finally finished shortly after 5:00. Bonnie took Debbie for a stroll—so there was some quiet—although this was broken by the twins next door. After finishing the book I looked over my tomato patch, then started working on supper. Watched CBS news. Then did some phoning, then turned to reading for a while. At 8:30 watched Ironside, then Dragnet, after which I returned to reading—now in Wright’s introductory article to Deuteronomy in IB. Bathed about 11:00; Bonnie + I had a long talk about sex, our problems, feelings—solutions—then Θ+ –didn’t fall asleep until late.

Up rather late—about 9:30. After a quick breakfast my main concern was the sermon. My thoughts crystallized quickly—with the help of “sermon-starter” in Xn Advocate. I worked on it in what was left of the morning, and was about half done when I stopped for lunch at 12:30. Bonnie left for work, and I put Debbie in her room. I continued on the sermon, and finally finished about 2:45. Then I turned to doing the bulletins. These were done by about 4:00, then I spent another hour preparing the service, i.e., pastoral prayer, “words of explanation” to the responsive scripture. Thus I was ready for Sunday morning! I even practiced the sermon once before Bonnie came home. We fixed supper, watched CBS news; I baked a cake and iced it. Saw Eddie Garcia out in the yard, back from a week in NYC. He had received a reply from Gordon-Conwell regarding his letter about Roland Villars—in which he’d sent photo copies of Roland’s hate notes. Gordon-C seems genuinely concerned. I had planned to get a fair amount of work done this evening, but there were interruptions—two long phone conversations. One with Becky Bussey, then one later with Jim when he returned my call. But I did get some reading done. I had a late snack about midnight; we bathed together; OBLO, 1:00 AM.

Up about 9:00. Shaved, had breakfast, then spent my morning on the go. I had to put posters (concerning the Drug Program) all around town. On foot I covered key points in Rockport, then drove to Gloucester, and home the long way through Annisquam. I wasn’t home until shortly after noon. We had lunch, then about 1:15 we went to the Lewis’s. Jerry and I walked over the Fisk’s to get swimming passes—then we drove to the pit. It had been cloudy most of the morning, but the sun came out beautifully for the afternoon. We had a delightful time. I stayed out of the water most of the time; chatted with Mary Ann Lash. But for about the last ½ hour I was in the water; David Milke—a BUST student while I was there on STD—showed up; he married Dr. Brown’s daughter. About 4:00 we went to the garden with the Lewises; got potatoes, lettuce, peas, beans, squash. Came home, fixed a delicious supper with these things—along with ham sandwiches. We napped 5:45–6:30. Virginia Bate arrived and we went to the show at Little Arts: “True Grit”—and average film, enjoyable. Got home shortly after 9:00; I took Virginia home; had a snack, practiced the sermon; then finished Wright’s intro article on Deuteronomy in IB; bathed; OBLO, 12:07. 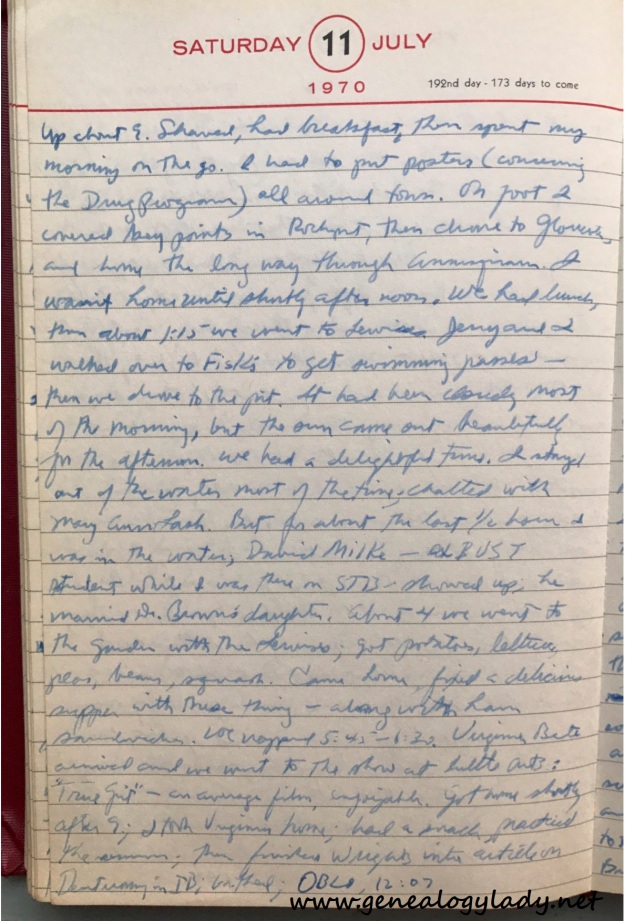