Up shortly after 9:00. As soon as I’d finished breakfast I wrote up my weekly article for the Eagle, plus a notice for the Gloucester Daily Times, re: next Sunday’s hymn sing. I then drove over to the Eagle office, and stopped at the P.O. on the way back—to mail the letter to the GDT. When I got home the mail was here; nothing much. I got involved in putting up Bonnie’s lid rack, after she’d stained it. It looked pretty good. In the a.m. however, I didn’t get much reading done. We had lunch about noon. Then I got to reading. Bonnie went to work. Debbie was asleep—she didn’t have lunch with us. I read, was able to make decent progress. Debbie didn’t awake until about 3:00. I gave her a snack of milk + graham crackers. I kept reading—Mowinckel’s Psalms. About 5:00 I put the chicken in the oven, but still read. I arrived at my stopping point about 5:50. I then helped with supper. We ate about 6:30, watched CBS news. After a stroll out to see the tomato patch I started in reading again. I played with Debbie briefly when Bonnie left for Community Chorus Rehearsal. Read all evening. We called the folks at about 10:15—they leave for Japan on Wed—wanted to wish them Bon Voyage. Read until about 11:00; had a snack, bathed; read til shortly after 1:00 AM; OBLO 1:04.

Up shortly after 8:30. Shaved, had breakfast, then set about my morning’s business—calling on parents of our Sunday School students, getting feelings about the merging of grades 3-6 with the Episcopals and Congo’s. I found three at home. I returned home about 11:00. Went to the church, prepared the paper for making posters—i.e., banners. Came home, had lunch—Bonnie left for work. It was my hope to get a lot of reading done in the afternoon. But Debbie didn’t nap—i.e., was noisy, and early in the afternoon I was drowsy—dozed for a while, but finally got going on the reading. Kept at it pretty steadily all afternoon. But the progress was slow, since I have to read psalms every now and then. After Bonnie got home from work I finally reached the stopping point which I’d been aiming for. Then I mimeographed some leaflets for the hymnsing; after supper and while watching CBS news I prepared these for mailing. At 7:30 I went to the church. The Lewis arrived, but Jerry was so tired he went home, but Carol, Bonnie and I (Carol’s sister was also there) made two banners. About 10:00 we finished, had cake here at the house. I drove them home; came back, visited a while with Mora, bathed together, OBLO, 12:07.

Up after 8:30, after Θ+. Even before having breakfast I went down to the church to complete work on the banners, i.e., attach sticks, erase pencil marks, and hang them up in the sanctuary—which also meant getting the wires strung. I got home about 10:00. Had breakfast, shaved—by 11:00 I was on my way to see the Swans; they weren’t at home, so I went to see another family with children in our Sunday School, regarding the planned merger. I got home—we had lunch about noon. About 12:40 I went to the church. I had an appointment with a man from the State DPW—regarding a sign for our church on the road into town. Homer Orne came along too. We drove out to Anker Inn, looked around, finally decided that a site near the town dump entrance would be good. Went to town hall to check boundary lines; we just happened to meet the woman who owns the property in question—we’ll contact her next week. Home about 2:00, went to see the Swans again—needed to talk with them, since they’re somewhat upset by my preaching against Agnew. Left there about 3:30. Saw Mrs. Cameron + Mrs. Anderson, re: Sunday School. Came home, looked at paper, straightened up my desk before supper. CBS news; I spent the evening reading; Bonnie went to dress rehearsal. Cake snack c. 10:00—read until about 11:00; I’ve been on the go all day—rather weary, OBLO bath + some Johnny Carson; 12:12.

Up about 9:00. My main concern for the day was to get some reading done—I’ve been on Mowinckel’s The Psalms in Israel’s Worship for too long—had to(o) many other demands on my time. I read until about 1:00—reached the stopping point that I was aiming for. Bonnie went grocery shopping, Debbie played in her room. After lunch, and shaving, I got back to reading. I took a break to thoroughly water the tomato plants. I read until about 5:20—stopped to put supper in the oven—Bonnie had gone to the garden. Then I read more—got to my stopping point again. We had supper about 6:15—watched CBS news. About 7:30 I took Debbie over to the Lewises. Jerry’s sister stayed with Debbie and Chris while we went to the Community Chorus. Bonnie, of course, was in the presentation (Weill’s Down in the Valley); I sat with Jerry + Carol. Jerry has arranged to meet with Noam Chompsky in early September; he asked me to go along. He wants to discuss his time in Loas—Chompsky just had an article in NY Review of Books, in which he quotes an article which Jerry wrote. At 9:00 I picked up Debbie. Bonnie went to the Chorus splash party (at Yankee Clipper); I stayed home to read. Stopped about 10:30—after Bonnie got home; bathed c. 11:00, OBLO, 11:20. 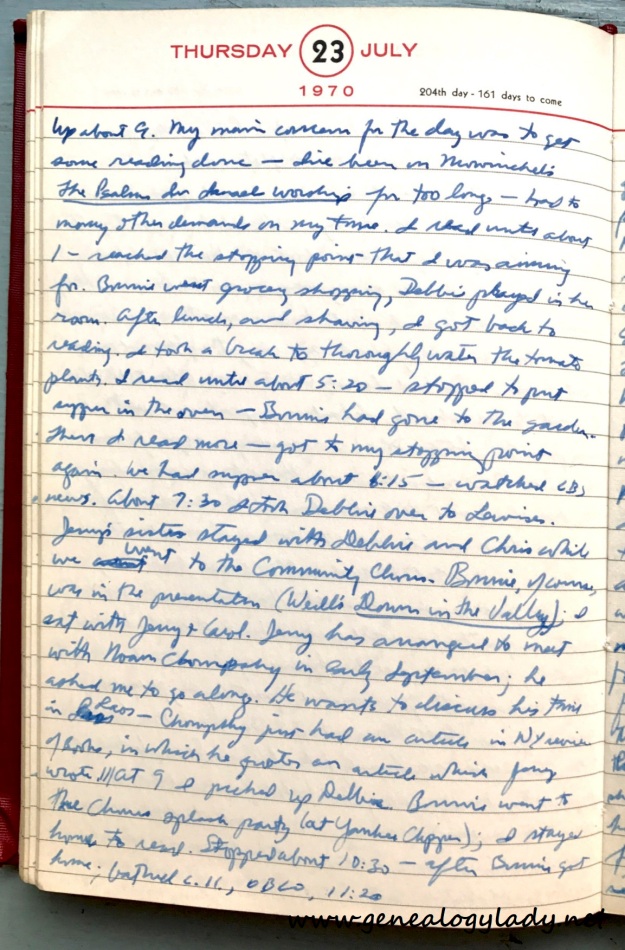