A long day—up about 8:30 after Θ—we didn’t bother with the foam, so if Bonnie ovulates in the next day or two, we might have made a baby—a month or two ahead of schedule. After getting up I shaved, had breakfast, dressed for church, then read for about a half hour after practicing the sermon. Left for church about 10:35. There was a decent crowd, about 40—the Hannibals were back too. I preached on “The Potter and the Clay.” After we got home we changed and drove up to the garden—hadn’t been there since Wednesday—we picked beans, corn, egg-plant, tomatoes. Got home, had lunch, then I got to reading after 3 o’clock. My reading didn’t last too long however; I got sleepy—I stretched out on the bed in the front bedroom downstairs—I was both sound asleep—and yet annoyed by the kids and grandmother next door. I finally very groggily got up about 6:00. Then we fixed supper. About 7:00 I called Mrs. Rapp to check on some details re: Play reading—had a long chat with her. Then I got more reading done. About 8:45 Mora came over to stay with Debbie and to do her laundry. We went down to the Little Art Cinema to see “O What a Lovely War”—it was excellent in spots—but was overly long. I was bored much of the time. We got home about 11:30—visited with Mora and Billy til about 1:15. Bill + I listened to some Wagner + to Anna Russell’s Ring Cycle; OBLO, 1:30.

Up about 8:30—not that I wanted to get up at that (h)our—since we got to bed at 1:30—but Debbie had gone to bed at a reasonable hour and was wake at her usual time. I got out of bed, went downstairs and read in Weiser for a while before Bonnie and Debbie appeared. I dressed, we had breakfast. My main concern for the day was again to get a lot of reading done. If I’m to take my exam on October 1, I can’t fall behind in my reading this month. I read in the morning—being Labor day there was no interruption by mail delivery—or paper boy (actually girl!) in the afternoon. We had lunch about 12:15, Bonnie went to work—her main project for the morning was getting a frame for Van Gogh’s Sunflowers. By 1 o’clock I had settled down for my afternoon’s reading, and aside from checking on Debbie and chatting briefly with Mora as she came and went with her laundry, I stuck to it until shortly after 5:00—at which time I began on supper. We ate not long after Bonnie got home—no CBS news—the damn baseball game was dragging on. In the evening we hung the painting in the living room, but I made progress on the reading. While we bathed we made suggestions to one another re: names for the next baby. Read a while after bathing; OBLO c. 12:15.

Up at 8:45—as soon as breakfast was over I got to my reading—I wanted to finish Weiser before the end of the day—and I did, about 10:15 this evening. I read all morning and all afternoon. We had lunch about 12:15; Bonnie went to work, Debbie played after her nap. There were some interruptions, but nothing major. About the middle of the afternoon Billy McKenney stopped by to say good-bye—he left to return to teaching in New York. When Bonnie got home about 5:20 we set about making supper. We ate, watched CBS news—then we went for a walk—what a joy to have Rockport free of tourists—bear skin neck was almost deserted—we had a leisurely stroll down and back—with Debbie in her stroller. When we got back, about 8 o’clock I called the new D.S. Mac White re: preaching for a C.A.M.P. installation service on the 20th; he agreed to—will also have supper with us. We chatted for more than 15 minutes—he wanted to find out a few things about Rockport and Cape Ann—since he’s new to the area. After this phone conversation I returned to my reading. Later in the evening Margaret Reilley called from Canada. She’s planning to return between October 1 and 10; what a relief it was to finish Weiser—now on to Eiesfeldt. Bathed together at 11:00; OB Θ+ LO midnight.

Up about 8:45. Went to Richdales after 9:00 for some bread. Came home, had breakfast, shaved; then made preparations for going to Boston—I planned to catch the 11:15 train—so I was at the station shortly before then. But the train was late—didn’t leave Rockport until about 11:40. I did some sermon planning and reading for sermons on the way in. When I got in—I went to Park Street station—from there I walked to 100 Summer Street to Baker Play Co—bought 8 copies of Harvey. From there I walked to 581 Boylston Street—conferred with conference treasurer Terry Thomason re: a report which has to be made. Had a nice chat with him. Stopped in Cokesbury briefly—then took the trolley to BU—did various errands, ate lunch about 3:00—registered—or rather signed up as a continuing student. Saw Beck briefly. Caught the 5:15 train home, got here shortly after 6:30. We had supper, watched the news. Then I relaxed for a while. I had read part of Harvey on the train home—I finished it relaxing on the couch. Then I cast the play. Then I went about delivering copies to 5 families—saw Jerry + Carol briefly. Also saw Ornes for a while. Came home, relaxed 10:30–11:30. OBLO c. 11:45. 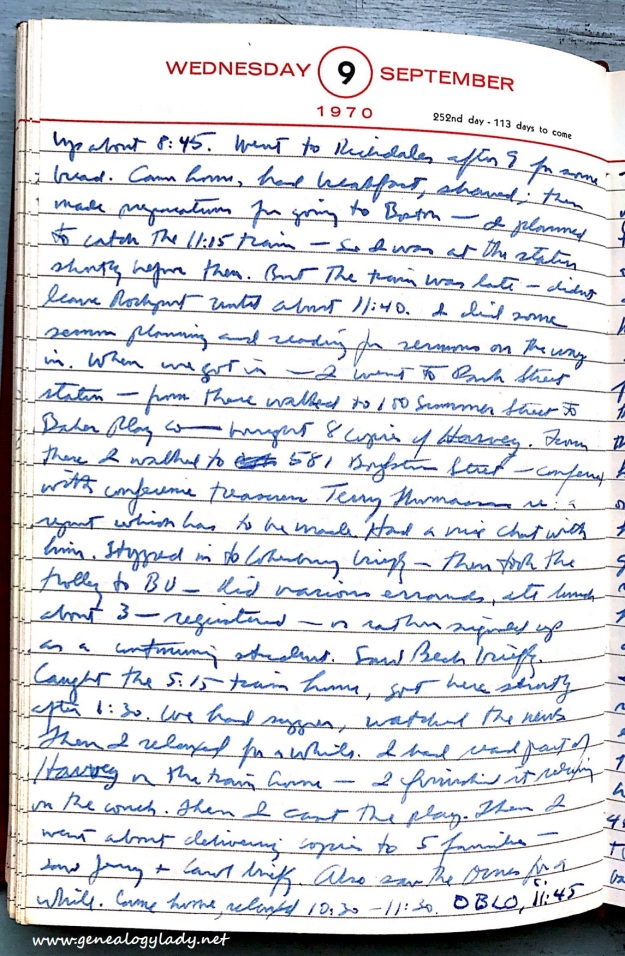