[Top panel: a letter from Whitfords today that they have a new baby boy]

Up about 9:00. Had breakfast, then headed for the Building Center. I had to get some wood—some pine to replace the shelves which I ripped out last night. Also ordered 2 sheets of plywood for making doors for everything. When I got home I got to work with the pine which I’d brought home—Bonnie went shopping for aquarium supplies—just as the router is turning out to be my Xmas present, so the aquarium is turning out to be Bonnie’s. She got home shortly after 12:00—we fixed lunch, and she left for work after eating. I put Debbie in her room after she finished—she went to sleep. I continued for a while on the building—then took a break—while I was on the break the Building Center truck arrived with the plywood. I got back to work about 3:00. Had the shelves all up and two side pieces of the frame in place when Bonnie got home. I put chicken in the oven—while moving the TV into the living room I stepped on the cord so that it came loose from the back of the set—threw a spark—so now TV has to be repaired. After supper I went ahead working on the framework around shelves. Bonnie worked on getting the aquarium set up. I had to spend quite a bit of time rebuilding the marble-top table which is usually in the front hall—Bonnie has chosen it for the aquarium, but it wasn’t strong enough; back to work on the framework—finished it essentially, then bathed, OBLO about 2 AM (!)

I didn’t sleep well last night—despite the late hour of retiring—then too, the fire siren blew erratically during the night and morning—so sleeping wasn’t easy. But I made it out of bed about 9:00—had some breakfast, but really felt lousy. Bonnie took off for Gloucester—to get TV cord replacement and some fish. She got back with cord but w/o fish—pet shop didn’t open til noon. While she was out I tried to figure how to put frame and doors on corner shelves—too many problems—so we decided to let those go. We fixed lunch, then after eating all three of us went to the pet store. We bought 8 fish and some supplies (also some water plants), got home about 2 o’clock—Bonnie put the plants in the water, we let the fish float in the plastic bag in the water for about 20 min—then released them. Then we left for the garden—did(n’t) get there til about 2:45. We worked for a while, but I was just too exhausted—we came home—I collapsed into bed. Later Bonnie came to nap too—and Debbie was out of it. About 5:45 I began puttering in the kitchen—baked a cake. Gary Wait arrived about 6:30. We had supper together, then spent the evening watching a film on TV—The Russians Are Coming—before which Gary and I did the bulletin for tomorrow’s service—after which we talked about fish; B + I bathed together; OBLO, c. 12:50 Θ.

Up about 7:30—shaved, had a quick breakfast—we left about 8:15 for Cambridge. We followed Jerry + Carol Lewis—Elizabeth Knowlton rode with us. We got to the Quaker meeting about 9:20—left Debbie and Chris in the nursery—meeting lasted about an hour. Predominantly young people—the children left about 9:55—only 2 people were moved to speak. It is a form of worship one will have to get used to, but I find it more meaningful than the Methodist—or general Protestant—liturgy—words, empty words. I wish that we could go more often. Someday. We had a coffee hour after meeting was over—then headed home. Jerry + Carol came for lunch, and Gary Wait too. Elizabeth couldn’t stay that long. Early in the afternoon we visited with our company. But by 3 o’clock they had all cleared out—about 3:00 Gary went out for a walk. Then Bonnie and I napped—Debbie was already asleep. I got up after 5:00. Did some sketches for a stand to hold 3 fish tanks. About 6:30 I had some supper. Gary came in (with a friend) and left for the train soon after. The friend had come to Rockport on the train earlier in the day. At 7:00 I picked up the Ornes, we went to the subdistrict meeting in Ipswich—re: Special Session of the Conf. on Oct 31. Got home about 10:00. Had a snack, did some sanding in the kitchen, but tried to relax. Read in bed briefly; LO.

Up about 9:00—and not feeling a bit like getting up. I wrote a brief article for the Eagle and took it over to the Eagle office. The rest of the morning I did some light reading, tried to get started on desk work, played with Debbie in the yard. About 11:45 I began getting lunch for us all. Bonnie had spent the morning varnishing the deacon’s bench, and shelves in kitchen, and was rushing to get them done. Just about noon, I got a call from the hospital: John Wicky, Bertha’s husband, had been admitted to ICU. I arranged to have Sarah Orne babysit with Debbie, shaved, got dressed, then went to the hospital at 1:00 with Bonnie. I saw John briefly, then returned to Rockport and spent about an hour chatting with Bertha. John’s condition doesn’t appear to be too bad. I returned home, Sarah left, (I found one of our tropical fish dead on the carpet) began desk work, which I continued until about 4:40. I hurriedly put supper in the oven; Debbie was just waking up. We then got in the car and drove over to get Bonnie. Came home, had supper, watched CBS news. Bonnie went to Community chorus rehearsal during the evening. I worked on the doors for the kitchen cabinet. Got two cut out, grooves cut, edges rounded, watched TV during this evenings work. Knocked off about 12:00; bathed; OBLO, c.1:15. 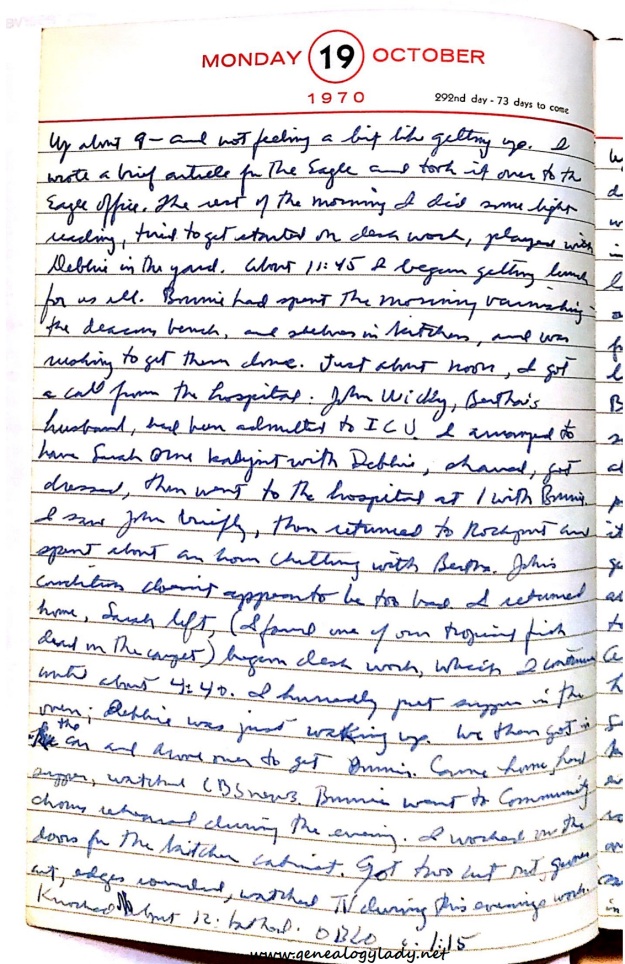