Up shortly before 10:00. Had a hearty breakfast, then turned to reading—in von Rad’s commentary on Deuteronomy. I spent some time with the mail when it arrived. I didn’t eat any lunch when Bonnie did about 12:30, because I’d had such a large breakfast. Debbie went down for a nap and I settled down to write my sermon. This took the afternoon, but I had it finished by the time I had to start supper. I had supper almost ready when Bonnie got home. We ate, relaxed, watched part of CBS news. But we left before it was over—we took Debbie over to Jerry and Carol, then went to Gloucester to see “It’s a Mad, Mad, Mad, Mad World”—a movie of just plain slapstick—but loads of fun—pure escapist entertainment. We got back to Lewis’ about 10:30 and spent about 45 minutes with them. They now have Carol’s loom set up in the basement and she has been weaving for the last couple of days, making scarves. Jerry and Carol are really two very talented individuals—he rebuilt the loom—is quite skilled. Carol also gave us some tips on making bread. We headed home about 11:15—relaxed, got our baths; stormy night—high wind, heavy rain. OBLO, 12:20.

Up about 9:15—shaved (2 days worth) had breakfast—I had intended to put my sermon into final draft this morning, but I got side-tracked ordering some things concerning Planned Parenthood. But I finally got to the sermon about 11:00—and worked on it straight through til after 1:00. Then we stopped to get lunch. This was finished about 2:00, at which time I prepared to go calling. I went to see John Wicky—for about an hour—as usual had a pleasant visit with Bertha. From here I drove up to Hannibals, but no one was home, so I went to see Lucy Patience. I hadn’t seen her for a while, so I stayed an hour and a quarter. Then I came home and helped Bonnie prepare supper. Debbie hadn’t had a nap all day, so she went to bed right after supper. I turned to working on the bulletins. When I finished with this I tended to work on my desk, then went downstairs to prepare and rehearse the whole service. Practiced the sermon. Then Bonnie and I had a snack together. We decided to get to bed early; I read through the book of Ruth (as preparation for my Sunday School lesson) while she bathed; then I got my bath—then we headed to bed; OBLO 10:50.

Up about 8:15. I practiced my sermon, shaved, dressed. My class of 5 arrived about 9:30. We read most of the book of Ruth. Then about 10:40 I left for the church. A miserable day, rain fog drizzle cold, but we had a moderate crowd—I preached on drug abuse, part III in the series “a Trilogy of Crises”; the Marrs were back from Scotland last Sunday, but they weren’t there today. We wondered why. The banners? The announced topic? Who knows. We got home from church about 12:30, prepared lunch. Debbie was exhausted from a morning [at] play at Sunday School, so she went down for a nap immediately. I immediately started writing letters after lunch. First I wrote to Bonnie’s folks, with the news that she is pregnant; then I came in to nap for a while; Θ; after a while I got up, wrote a letter to David Watson. Then we began to think about supper. Then I went down to Richdales for bread, milk and a pie. I fixed supper when I got home, i.e., put part of it in the oven. Then I began a letter to Mrs. Myers. After supper I continued on this letter until about 7:00—I then left for Gloucester, picked up Virginia Bate on the way—we went to Concerned Citizens Annual Meeting—home about 10:30. Bonnie and I had a snack, I worked further on the letter to Mrs. Myers. Bathed; OBLO 12:55.

Had a difficult time getting to sleep last night, so getting up this morning wasn’t easy. Breakfast wasn’t over with until after 10:00. I then turned to getting my letter to Mrs. Myers finished; also wrote my brief article for the Eagle. About 11:45 I went over to see Ed Nutting to confer on tomorrow evening’s Joint Church Committee meeting; also wanted to get his feelings on a union service sometime in the spring with Bishop Mathews as preacher. From his office I went to the Eagle office on South Street; then came home in time for Bonnie to get to work. After she’d left and with Debbie playing continually in her room, I had my lunch, tried to give some thought to two more banners to make for next Sunday on a Thanksgiving Theme. After eating I got my desk straightened up and organized a box-full of bulletin inserts which arrived this morning in the mail. Finally I got around to reading Deuteronomy. About 4:30 I began working on supper, read the newspaper. Not long after Bonnie got home we ate; finished in time for CBS news—about 7:30 Bonnie left for Chorus rehearsal; I put Debbie down for the night about 8:00, then returned to working on Deuteronomy. Bonnie got home about 9:30; we had a snack, then I returned to studying, no bath; OBLO 11:20. 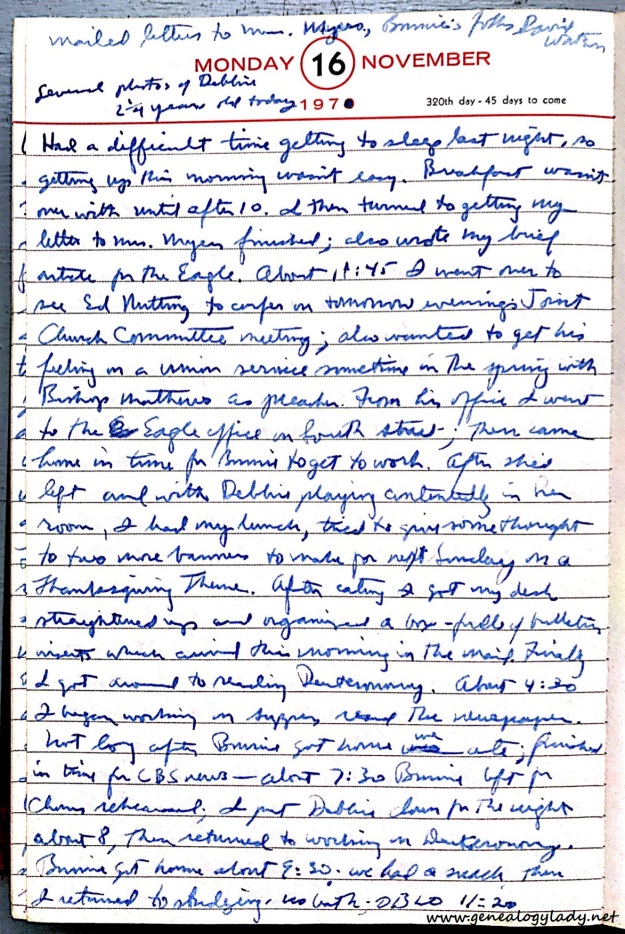