Up at 9:00. Had breakfast, shaved. My NT reading was I Peter 1-2; OT: Judges 1-5. I was only very briefly occupied with the mail when it arrived. I had mailed the letter to Gary Myers; the return receipt came back today—not his signature, however. I hope he got the letter. Had lunch during the noon hour. For most of the afternoon Bonnie and Debbie were napping—or reading (Bonnie said she napped about an hour.) I made decent progress on my reading. I finished Eissfeldt’s article in OT and Modern Study. Then began a review of Lindblom, i.e., rereading the section on the prophetic literature. I got as far as Amos by supper time. I.E., I am trying to read the text as I go along. I read through the paper before working on supper. Had a very simple supper. 6:00-6:30 read in Amos. 6:30-7:00 CBS news. Senator Kennedy was defeated for Sen. Dem. Whip—regarded as a definite set-back for any presidential try in 72. CBS news says that Nixon + Co. are very happy. But so is Muske, no doubt. But why should Nixon be so happy at the prospect of facing Muske—who already leads him in the polls and seems to have so much more dignity, stature and decency? After TV began working seriously in Hosea. 8:30–9:30 as usual watched Ironside. 9:30–11:00 returned to studying—finished Hosea, then turned to Lindblom’s section on Isaiah; read closely chapters 6–9:7. This was the day I transferred the pregnant guppy to separate bowl. Bathed about 11:30. OBLO c. midnight.

Up about 9:00. Shaved, had breakfast—turned to desk work. I had to get 10 post cards ready to send out to the members of the Monday evening C.O.C.U. group—notifying them that the meeting will be here. Then I wrote the letter to the Chaplain aboard the U.SS. Wasp re: the Favreau family situation. When all of this was done I went to the P.O. Saw Margaret Reilley, had a brief chat. Almost noon when I got home, but I started typing a stencil on the Planned Parenthood bulletin insert; Bonnie called me to lunch. We ate, Bonnie left for work, Debbie went to her room for playing and napping. I did some phone calling (Dunnach + Bussey), finished the mimeo work on the bulletin insert. Also I ran off copies of the new Parish News service stencil. About 3 o’clock I began serious work on the sermon. About 4:00 I put the meatloaf in the oven, then worked on the sermon until about 5:00. We ate as soon as Bonnie got home. 6:00-6:30 looked at the paper 6:30-:00 CBS news, etc. 7:30–9:00 I did my daily scripture reading: I Peter 3-5, Judges 6-8, worked more on the sermon. 9 o’clock—Nixon’s State of the Union address. A collection of banalities. I worked on the PP/WP bulletin inserts—after the address we listened to analysis on 5 and 2 while I finished work on the inserts. Then I did more work on the sermon; finished the very rough draft. Bathed about 11:30. OBLO c. midnight Θ.

Not up until late—about 9:30. Had breakfast, shaved. During the morning that was left I transcribed the sermon—about the first half of it—then we had lunch. Then after eating I returned to working on the sermon. When this was completed I turned to working on the bulletins—when I finished this, I went out on a call—to Hannibals. Rip seems very eager to get back into the swing of life. He’s planning to come to the next administrative Board meeting—3 years ago I wouldn’t even have believed I’d ever see the Hannibals in church—but now Rip comes regularly. After leaving Hannibals I went to Gloucester—I went to Dunnachs—left off the PP/WP bulletin inserts. Then I dropped off the inserts for Wesley at Busseys—Jim was out; it was this morning that Becky left—i.e., beginning their move to Arizona. I told Bonnie she wouldn’t see Becky Bussey again until after she’s 40. Not at all impossible—Arizona is pretty far away. I got home about 5 o’clock. Bonnie had supper just about ready. We ate—relaxed. I prepared the service, practiced the sermon. Then I iced the cake Bonnie had baked. After this I finally worked up the ambition to do my daily scripture reading: II Peter (all); Judges 9-12. Then I turned to preparing my Sunday School lesson—i.e., read in Mark—I am struck by the heavy emphasis on demons in Mark; bathed about 11:30. Read in bed, Judges 13-18 OBLO c. 12:20.

Up about 8:15. Shaved, had breakfast, practiced sermon. My Sunday school class arrived about on time: 4 in attendance. I got to the church about 10:40. Preached on: “Adding Dynamic to Decent”—average sized congregation. We got home about 12:40. Vicky told us that Jerry Lewis had called, so Bonnie returned the call. They wanted to come get the bed, i.e., the twin bed which Debbie has been using, which they loaned to us a long time ago. They decided to come around 5:00. We decided while we were having lunch to invite them for supper. I called them early in the afternoon and that was agreeable with them. 1:30–2:30 I relaxed—tried to doze. At 2:30 picked up Winnie + Kay, we went to the Den-Mar for the service—3:00 to 3:30. Saw Esther Longley before it started. Home by 4:00. Got some reading done (my daily NT reading: I John 1-3) but helped prepare supper. The Lewises arrived about 5:00. I went with Jerry to Bussey’s—where we picked up the crib which the Lewises were buying and the dressing table which we bought. Came home, had supper—after which relaxed. About 8:00 I helped Jerry take their bed home. When we got back we saw our Xmas 1970 movie—since Jerry had brought their projector along. After they left I did some reading (OT: Judges 19-21) but was pretty droopy. Bathed before 10:20. OBLO c. 11 o’clock  Θ. 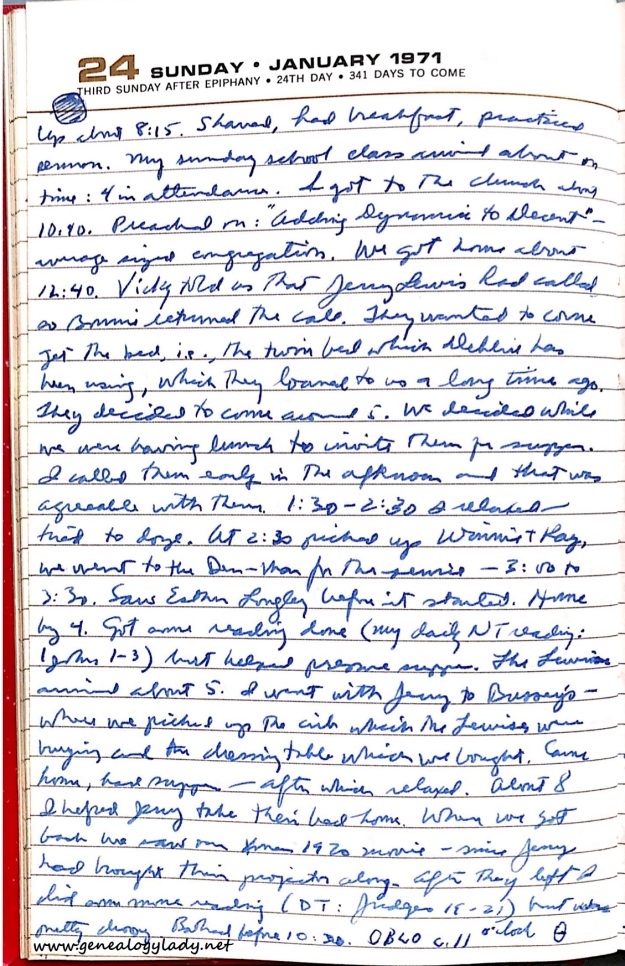