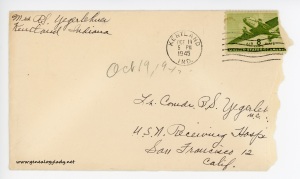 It is cloudy with some rain. I ordered a load of stoker coal from Harlan. Just hope Monroe can get a new auger soon. Since the weather isn’t favorable for drying clothes I didn’t wash.

I went down to the office and worked a while last night. I didn’t try to save much from the drug room. I possibly threw away something of value but I doubt it. I had Mark go over to Kenny’s and get a large box and we just dumped things into that. Now when Vincent gets the carpentry done I can go and clean that room since I cleaned out most of the junk last nite. Vincent said he wouldn’t work anymore this week, but is going to get it finished next week. Monroe said he would move the heating plant when Vincent finishes so I think things will get along very well. Nick took a case while we were there and said he would soon have it all out of the way. I asked him about Mildred and he said he had a card from her and she will be gone 2 more weeks. She should have had someone fixing her side while she is away. I went out in the back to find a broom and it isn’t so bad back there. There is plenty of junk to be moved out but it not as bad as it has been at times. Mrs. Krull said she was going to have Lontz clean it out and even mentioned having it white washed. I found a good toilet seat in the drug room. I have no idea where it is from, but it may be used on the toilet in back. I also found a box of glasses & drinking tubes which I think Geo. Tilton left. He had things stored in there last year and the box had Kentland Frurn on it.

I called Emma about a perm but she said she was booked two weeks ahead, then she had a cancellation for tomorrow so it took it. I was going 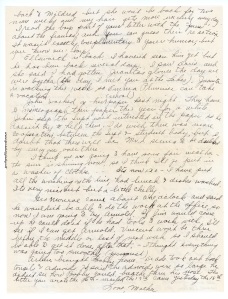 [page 2] back to Mildred but she won’t be back for two more weeks and my hair gets more uncurly every day. I read the boys part of your letter with the “pun” about the frames and you can guess their reaction. It wasn’t exactly complimentary to your humor, but you know our boys.

Ellsworth is back. I haven’t seen him yet but he has been back several days. I saw Doris and she said I had gotten Juanita’s gloves the day we were together (the day I met you at the Lakes). Juanita is working this week so Emma Plummer can take a vacation.

John worked on his school paper last night. They have to mimeograph their paper this year for a while. John says the Supt. Isn’t interested in the paper so he doesn’t try to help them. I do wish there was more co-operation between the Supt. & student body, but I doubt that there will be. Mr. S. seems to be disliked by every one over there.

I think we are going to have some fair weather – the sun is shining now, so I think I’ll go put in a washer of clothes. – – It’s now 1:30 – I have put all the washing on the line, had lunch & dishes washed. It’s very nice out but a little chilly.

Geo. Monroe came about one o’clock and said he wouldn’t be able to do the work at the office, so now I am going to try Arnold. If Jim would come up he could do it if he had tools to work with. I’ll see if I can get Arnold. Vincent won’t be thru before the middle or last of next week so I should be able to get it done after that. – I thought everything was going too smoothly. (pessimist)

Arlene brought Bobby home. Dr. Ade took out both tonsils & adenoids. He said the adenoids were so large he didn’t see how Bobby could breathe thru his nose. The letter you wrote the 16th – mailed the 17th came yesterday the 18th. 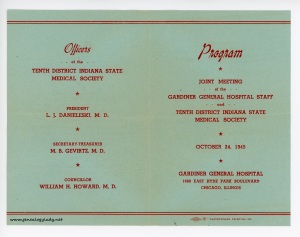