Mrs. Mary E. Yagerlehner, 70 yrs. old, died at the Boulevarde sanitarium at Detroit, Mich., at 8:40 o’clock Sunday morning. Death was due to infirmities of age, hastened by suffering a fractured leg two weeks ago. She had been an invalid for a number of years and was taken to the sanitarium two years ago.

Mrs. Yagerlehner was born at Liberty Center, Ohio, November 27, 1846 and her early life was spent there. On June 3, 1866, she married John Yagerlehner. They lived there for thirty years and then came to this city, where she lived until she was taken to Detroit two years ago.

The funeral of Mary E. Yagerlehner was held Wednesday afternoon with burial in the Hopewell cemetery north east of Lagro. The services were held at the Hopewell church at the cemetery at 2 o’clock, the Rev. Frost of Lagro officiating. The funeral was largely attended and the ceremonies were most impressive.

Those who acted as pall-bearers were: four sons Charles of Detroit, William of Ft. Wayne, Ervin, of Lagro, John of Detroit, two brothers N.C. Wright of Wauseon, O., and James Wright of Liberty Center, O. 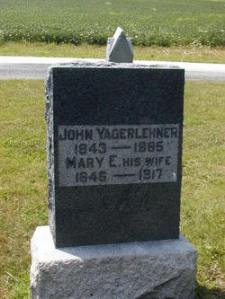 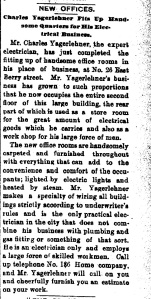 Charles Yagerlehner Fits Up Handsome Quarters for His Electrical Business

Mr. Charles Yagerlehner, the expert electrician, has just completed the fitting up of handsome office rooms in his place of business, at No. 26 East Berry street. Mr. Yagerlehner’s business has grown to such proportions that he now occupies the entire second floor of this large building, the rear part of which is used as a store room for the great amount of electrical goods which he carries and also as a work shop for his large force of men.

The new office rooms are handsomely carpeted and furnished throughout with everything that can add to the convenience and comfort of the occupants; lighted by electric lights and heated by steam. Mr. Yagerlehner makes a specialty of wiring all building strictly according to underwriter’s rules and is the only practical electrician in the city that does not combine his business with plumbing and gas fitting or something of that sort. He is an electrician only and employs a large force of skilled workmen. Call up telephone No. 186 Home company, and Mr. Yagerlehner will call on you and cheerfully furnish you an estimate on your work.

Fort Wayne is becoming noted for her handsome display windows and electricity plays no minor part in their ornamentation. The latest addition to these windows are the large ones in the new Wolf & Dessaur Dry Goods house.

The electric wiring in these windows was done by Mr. Charle Yagerlehner, of No. 26 East Berry street. There is over thirty incandescent lights placed in each window and the artistic grouping and the neatness of the workmanship speaks volunes for the ability of Mr. Yagerlehner as an electrian.

The large display windows of the Globe Clothing house, with their sixty or more lights, are also silent witness to the ability of this popular electrician. In addition to handling electrical goods, door bells, etc., Mr. Yagerlehner makes a specialty of placing telephones in business houses, having just placed a number in the Root & Co. dry goods store, and the A.L. Johns wholesale harness house. Mr. Yagerlehner has his office with the Ogden Plumbing Co., and gives all work entrusted to his care his personal supervision.

In the large south show window of the Wolf & Dessauer Dry Goods house is an attraction that catches the eyes of thousands of people daily, who stop to gaze upon the beauty of the display. On a revolving pedestal in the center of the window is a handsome bicycle, which eventually will be presented to some lucky patron. The entire background of the window is covered with some soft grey material, giving it the appearance of a grotto, and is the design of Mr. A. B. Hergusheimer, the expert window dresser for this firm. Over the bicycle are two revolving arches, studded with myriads of different colored lights. The mechanical part of this display is the work of the Summit City Manufacturing company and the electric part of it by Mr. Charles Yagerlehner, of No. 26 East Berry street.

Mr. Yagerlehner makes a specialty of this kind of electric work and is prepared at all times to furnish electric lights of any color at short notice at moderate prices. Owing to his straight business methods, Mr. Yagerlehner’s business has grown to immense proportions, and he has now a number of large contracts on hand, among them being the wiring of the Wayne street M. E. church and the new Church of Christ, on West Jefferson street. Last week he finished placing a 124 point enunciator in the Winona Lake hotel at Warsaw. All work done by him is according to the rules of the national board of fire underwriters and fully guaranteed. At present he is engaged in re-wiring a number of business houses that were wired not in accordance with these rules. While not claiming that Mr. Yagerlehner is the only electrician in the city, we will say that he stands in the front rank in all kinds of electric work, from beautiful window decorations up to fitting out the largest building, and can always be found at his office, No. 26 East Berry Street.

A PAIR OF PAIRS

The announcement has been made of the marriage of Miss Clara Greenewald, daughter of Dr. M. Greenewald, of East Washington street, to Henry J. Ripley, which occurred at the home of the bride’s aunt in St. Louis, on Christmas evening. The bride is quite popular in this city. The groom is a representative of the Ripley house at Mansfield. The [sic They] will reside at St. Louis.

Sunday afternoon at the home of the bride’s parents, in Marion township, occurred the marriage of Miss Lucy Ake and Mr. William Yagerlehner. The ceremony was performed by Rev. P. J. Rice, the pastor of the Christian church. The groom is a brother of Chas. Yagerlehner, the electrician of this city, and is in his employ.