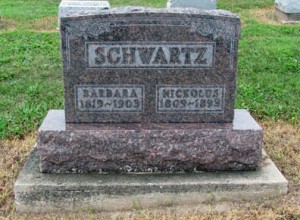 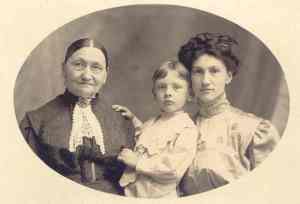 Elizabeth (Schwartz) Yegerlehner with her youngest daughter Sophia (Yegerlehner) Thatcher and grandson Russell Thatcher, circa 1910. Photograph was possibly taken in Indianapolis, Indiana where Sophia lived or in Clay City, Indiana.

The original photograph comes from a photo album that was scanned by Eric Graham. He was visiting relatives in California when he discovered this album in their possession, and (thankfully!) he had the foresight to ask if he could copy the pictures. 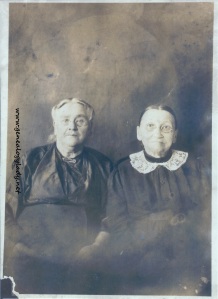 Elizabeth (Krieble) Schiele and Elizabeth (Schwartz) Yegerlehner, the mothers of Lovina J. (Schiele) Yegerlehner and John H. Yegerlehner. Both were widowed around 1900. They died in 1922 within four months of each other.

Original image from the private collection of the author, Deborah Sweeney 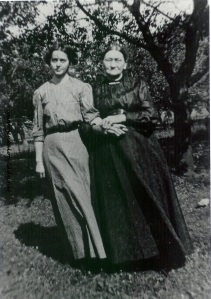 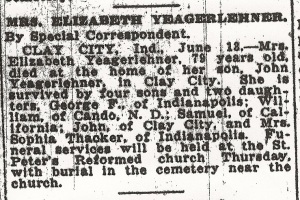 CLAY CITY, Ind., June 13 – Mrs. Elizabeth Yeagerlehner, 79 years old, died at the home of her son, John Yeagerlehner, in Clay City. She is survived by four sons and two daughters, George F., of Indianapolis; William, of Cando, N.D.; Samuel, of California; John, of Clay City, and Mrs. Sophia Thacker, of Indianapolis. Funeral services will be held at the St. Peter’s Reformed church Thursday, with burial in the cemetery near the church. 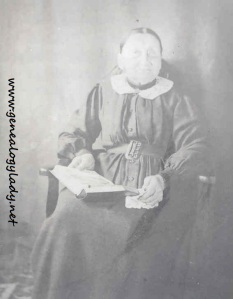 Photograph in the collection of Deborah Sweeney

Elizabeth was the daughter of Niklaus and Elizabeth (Kunz) Schwartz. She was a native of Biglen, Canton Bern, Switzerland. She was the eldest daughter and fourth child of her parents. In 1852, she sailed with her family on the ship Hungarian from Le Havre, France. On arriving in the United States, the family settled near Berlin, Holmes County, Ohio, in a predominately Swiss settled area. She married Christian Yegerlehner on 24 November 1861. Christian was also a Swiss native from Canton Bern, Switzerland. A few years later, they moved further west to Owen County, Indiana. They eventually bought farmland in neighboring Clay County, Indiana (which still remains in the family today). She was the mother of ten children. 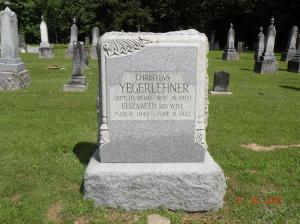