The mayor’s cabinet will meet this morning in Mayor Taggart’s office. It is expected the Board of Health will give some information on the smallpox situation. It was also said yesterday the mayor will discuss the elevated track question before the members of the cabinet. 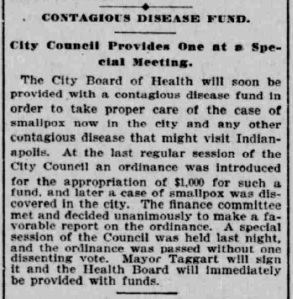 City Council Provides One at a Spe-
cial Meeting.

The City Board of Health will soon be provided with a contagious disease fund in order to take proper care of the case of smallpox now in the city and any other contagious disease that might visit Indianapolis. At the last regular session of the City Council an ordinance was introduced for the appropriation of $1,000 for such a fund, and later a case of smallpox was discovered in the city. The finance committee met and decided unanimously to make a favorable report on the ordinance. A special session of the Council was held last night, and the ordinance was passed without one dissenting vote. Mayor Taggart will sign it and the Health Board will immediately be provided with funds.