The last two days have been cloudy ones with occasional showers – good ones to be indoors catching up on letter-writing and packing. Yes, we’re packing and hoping to return home by the middle of October.

All the officers here have enough points for discharge with the exception of Captain. The school is to be decommissioned in December so all of them should be civilians by the beginning of next year. Van, however, has applied for discharge since he’d like to enroll the first semester at college. How soon does Dr. expect to be discharged; he surely has accumulated enough points?

For the last few Sundays the officers and wives have eaten their Sunday dinners at school. It seems pretty fine not to have to prepare food on such hot days. You are fortunate to have boys who are interested in cooking. Having good cooking 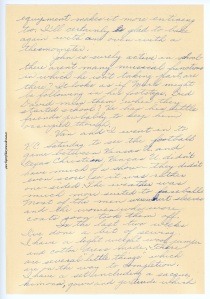 [page 2] equipment makes it more enticing too. I’ll certainly be glad to bake again with an oven with a thermometer.

John is surely active in school – there aren’t many musical functions in which he isn’t taking part, are there? It looks as if Mark might be following in his footsteps. Did David miss them when they started school? He has his little friends probably to keep him occupied though.

Van and I went in to K.C. Saturday to see the football game between Kansas U. and Texas Christian. Kansas U. didn’t have much of a show – they didn’t even score so it was rather one-sided. The weather was much more suited to baseball. Most of the men were in shirt sleeves and the women who wore coats soon took them off.

In the last two weeks I’ve done a bit of sewing. I have a light weight wool jumper and cotton dress made. There are several “little things” which are on the way to completion. I have a set including a sacque, kimono, gown and Gertrude which

[page 3] I’m embroidering and making a crocheted border on each.

Van says to say “hello” and would like to hear about Dr. so write when you can. Perhaps our next letter should be sent to: 441 Balch St., Kalamazoo 33, Mich.

David is learning the words we spell – know when we spell “car.” Has finally learned to drink orange juice. Also likes to sip Coke when we drink one. Says, “Coke” very plainly. We now have a piano for John to practice on and he likes to play on it. John is trying to teach him (David) a beginner’s piece. While I take a sun bath he likes to get a handful of sand and pour on my back.

The following picture appears courtesy of Gladys’ niece, Gerry. It was originally mailed to Gladys’ brother Glenn in Nevada and remained with his family’s photographs.

Aug. 8 – David started running a temperature on the 10th he started to break out with measles (3  day). By 13th he was over them. Lost a finger nail – got it mashed and after two weeks it started coming loose.

Meanwhile, the Yegerlehner family was reunited in Liberty, Missouri, where Roscoe would be stationed for the next 14 months at the William Jewell College Naval Flight Preparatory School.

Since David’s last month he has traveled by train from Chicago to Kansas City, Mo. – (506 miles). David has two more teeth (upper bicuspids). Now comes in and says “tie-tie” when he wants to toidey. Gets anyone’s shoes he can find and walks around (clomp, clomp). He likes the story of the Three Billy Goats Gruff. Knows the pictures in the book and points out the different objects. David and Mark have a double deck (Navy) bed. Mark sleeps on the upper and David lower. He can climb up on his bed anytime he wants to.