[Editor’s note: Gladys did not write a letter on October 17th as she was likely too busy with the funeral and all the visiting relatives. Emma’s obituary appeared in the next edition of the Newton County Enterprise. The paper announced that the funeral had been the previous Sunday (10/17).] 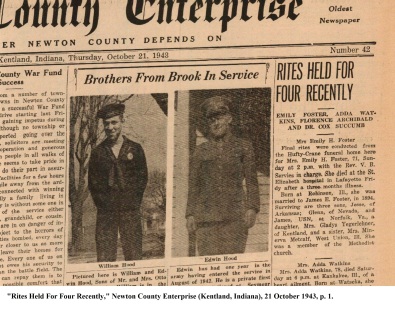 Final rites were conducted from the Hufty-Crane funeral home here for Mrs. Emily H. Foster, 71, Sunday at 2 p.m. with the Rev. V. B. Servies in charge. She died at the St. Elizabeth hospital in Lafayette Friday after a three months illness.

Born at Robinson, Ill., she was married to James E. Foster, in 1894. Surviving are three sons, Jesse, of Arkansas; Glenn, of Nevada, and James, USN, at Norfolk, Va., a daughter, Mrs. Gladys Yegerlehner, of Kentland, and a sister, Mrs. Minerva Metcalf, West Union., Ill. She was a member of the Methodist church.

Emma was buried at the Fairlawn Cemetery, Kentland, Indiana. You may visit her memorial at Find A Grave.