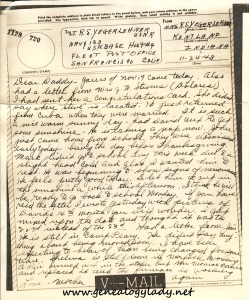 Dear Daddy – Yours of Nov. 17 came today. Also had a letter from Mrs. J.W. Stevens (Dolores). I had sent her a congratulations card. She didn’t say where “Steve” is located. He just returned from Cuba when they were married. It is such a nice warm sunny day – had David out to get some sunshine – He is taking a nap now. John just came home from school. They were dismissed early today – being the day before Thanksgiving. Mark didn’t go to school any this week due to a slight head cold and also I wanted him to rest. He was beginning to show signs of nervousness. He feels pretty good today. I let him go out in the sunshine a while this afternoon. I think he will be ready to go back to school Monday. If you have rec’d the letter I wrote yesterday with pictures of David’s 14th month you will wonder. I got mixed up on the date and thought it was the 22nd instead of the  23d. Had a letter from Jim. He is still in Camp Peary. He didn’t say anything about being moved soon. I have been expecting to hear of him being changed for some time. Thelma is still down in Norfolk working. A Pin burned out in the stoker but Mr. Monroe came and replaced it and the furnace is working again.