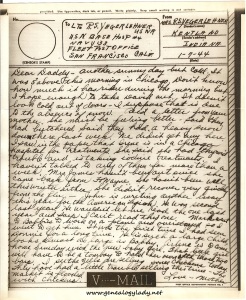 Dear Daddy – Another sunny day but cold. It was 5° above this morning in Chicago. Don’t know how much it has risen during the morning but I hope enough to take David out. It doesn’t look cold out of doors – I suppose that is due to the absence of snow. Rec’d a letter from your mother. She must be feeling better – said they had butchered. Said they had a heavy snow down there last week. We didn’t get any here. I saw in the paper that Irene is in a Chicago hospital for treatments. She said she had thyroid trouble and is taking iodine treatments. I haven’t talked to any of them for more than a week. Mrs. James hasn’t been out since she came back from Ft. Wayne. She hasn’t been well this winter either. She didn’t recover very quickly from the flu – John is writing another essay this year for the American Legion. He won second last year. He wouldn’t let me read the one last year and says I can’t read this one. Mark went to Bobbie’s to work on a plane and overstayed so I went to get him. It was the first time I had seen Donnie for a long time. He is such a large child, looks almost as large as Bobby. Arlene is to come home Sunday with the new baby girl. That little girl will have to be a tomboy to hold her own with those two boys. I see the Zells are selling some chickens today. They have had a little trouble selling this time – The market is flooded with chickens.

1 thought on “Absence of Snow (Gladys)”