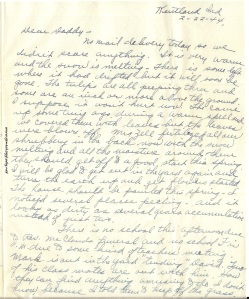 No mail delivery today so we didn’t score anything. It is very warm and the snow is melting – There is some left where it had drifted but it will soon be gone. The tulips are all peeping thru and some are an inch or more above the ground. I suppose it won’t hurt now. They came up some time ago during a warm spell and we covered them with leaves but the leaves were blown off. Mrs. Zell fertilized all our shrubbery in the back. Now with the snow melting and all the moisture around them they should get off to a good start this spring. I will be glad to get out in the yard again and turn the earth up and get flowers started. The house should be painted this spring – I noticed several places peeling – and it looks as dirty as several years accumulation instead of just two.

There is no school this afternoon due to Rev. McCloud’s funeral and no school Fri. P.M. due to some kind of teachers’ meeting. Mark is out in the yard “tending” David. Two of his classmates are out with him. How they can find anything amusing to do I don’t know, because I told them to keep off the grass. 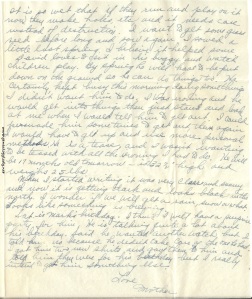 [page 2] It is so wet that if they run and play on it now they make holes, etc., and it needs care instead of destruction. I want to get some grass seed before long and sow again. I sowed a little last spring. I believe it helped some.

David loves to sit in his buggy and watch children play. By spring he will have to be put down on the ground so he can do things too. He certainly kept busy this morning doing some things I didn’t want him to do. I was ironing and he would get into things then just stand and look at me when I would tell him to get out. I could persuade him sometimes to get out, then again I would have to get up and use more personal methods. He is a tease, and I wasn’t wanting to be teased with all the ironing I had to do. He will be 17 months old tomorrow – is 32 ½” high and weighs 25 lbs.

When I started writing it was very clear and sunny and now it is getting dark and looks black in the north. I wonder if we will get a rain, snow or what. Looks like something is brewing.

Sat. is Mark’s birthday. I think I will have a surprise party for him. He is talking quite a lot about his birthday. Said he wanted another watch but I told him no because he didn’t take care of the one he had. I got him two new shirts and gave them to him and told him they were for his birthday but I really intend to get him something else.

1 thought on “Tulips Peeping Thru (Gladys)”