Sun. evening and the boys are in after a game of croquet with the Zell girls. David is asleep – Just went up to see bout him and he had taken off his sleepers. I want to retire early because have lots to do next week. I intend to pack dishes, etc., but the men who do Lyon’s moving will move the rest out into the attic. I told Mr. L. we couldn’t lease the house but he said he didn’t expect a lease but would like a 30 day notice. Their refrigerator won’t fit into our kitchen so that won’t have to be moved. They will use ours. I don’t know about the stove, but it they don’t use ours, I will tell them to store it in the attic.

[page 2] I gave Mr. L. a few instructions about the furnace but will tell him more before we leave.

As far as I know we will leave here on the 5 a.m. train and the 10 a.m. out of Chicago. I haven’t tried to get anyone to take us to Chicago in a car. I don’t like to ask anyone to make a trip that far unless they would be making it anyway. I haven’t seen much of Krulls. I called D. and went down to the restaurant one day but seems they were insulted because you didn’t go past and say good-bye – She wasn’t very friendly – in fact I had to make any conversation that went so I haven’t been back. I was entirely unaware of offending them but found out something was wrong and after getting the “freeze-out” decided to leave her alone until she thaws out.

I was out walking and stopped to see Arlene. She is having to rest quite a bit now. Her heart was bothering her, but she is feeling better. 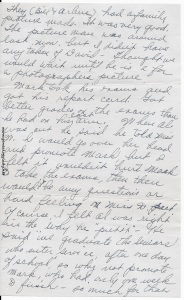 [page 3] They (Bill & Arlene) had a family picture made – It was very good. The picture man was around last Mon. but I didn’t have any take of David – Thought we would wait until he is 2 for a photographer picture.

Mark took his exams and got his report card. Got better grades on the exams than he had on his last term. When Al was out he said he told Miss W. he would go over her head and promote Mark, but I felt it wouldn’t hurt Mark to take the exams, then there wouldn’t be any questions or hard feeling on Miss W. part. Or course, I felt Al was right in the way he “put it” – He said “we graduate the Seniors who enter service, after one day of school,” so why not promote Mark, who had only one week to finish – so much for that. 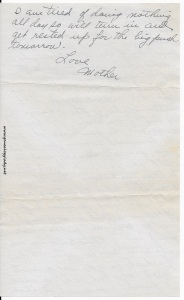 [page 4] I am tired of doing nothing all day so will turn in and get rested up for the big push tomorrow.