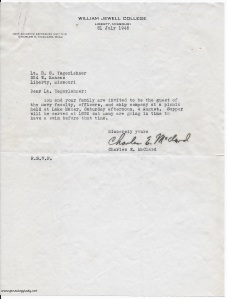 You and your family are invited to be the guest of the Navy faculty, officers, and ship company at a picnic held at Lake Mauer, Saturday afternoon, 4 August. Supper will be served at 1830 but many are going in time to have a swim before that time.

Lieut. Roscoe S. Yegerlehner, medical officer at the V-5 Naval Academic Refresher Unit at William Jewell college the past 14 months, expects soon to be reassigned to the Pacific fleet and will leave next Wednesday for San Francisco, it was reported today by Lt. John B. Moore, commanding officer of the school.
He will be replaced by Lt. Comdr. Claude B. Wright, who is scheduled to arrive in Liberty sometime this week from Jacksonville, Fla., where he has been in a naval hospital.
Dr. Yegerlehner came to Liberty after twenty months with land-based hospitals in the South Pacific. During his service there he had charge of sanitation and helped establish new naval hospitals in New Caledonia and in the Solomon Islands and elsewhere in the Pacific area. He was also at the Great Lakes naval training center for a time.
During his assigment here he has also had the supervision of the ‘sick bay’ at the Parkville college navy unit.
Mrs. Yegerlehner and two sons, Mark 12, and David 3, expect to go to the family home at Kentland, Ind. A third son, John, is a music student at Northwestern university. The Yegerlehners lived at 324 West Kansas street while in Liberty and during their residence made many friends.

1 thought on “Guest of Honor”