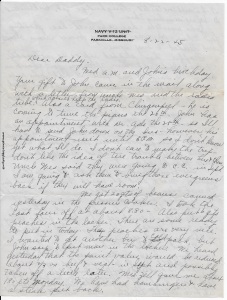 Wed. a.m. and John’s birthday. Your gift to John came in the mail along with a letter from Uncle Wes. And the radio tube which doesn’t help the radio. Also a card from Clingenpeel – he is coming to tune the piano the 28th. John has an appointment with Dr. Ade the 28th – so I’ll have to send John down on the bus – however, his appoint isn’t until 3 PM so I don’t know yet what I’ll do. I don’t care to make the trip – don’t like the idea of tire trouble between here & there. Uncle Wes said they were going to C.C. in Sept. I am going to ask them to bring those evergreens back if they will have room.

We got 20 qts. of beans canned yesterday in the pressure cooker. I took the last four off at about 8:30 – also put 6 qts. peaches in the locker. There are some ready to put in today. The peaches are very nice. I wanted to get another bu. To cold pack, but John says to put more in the locker. We heard yesterday that the point value would be reduced about 2/3 on beef & veal – in Sept. and possibly taken off a little later. Mrs. Zell gave me about 180 pts. Monday. We have had hamburger & have a steak put back.

[page 2] I haven’t contacted Loughridge yet, but intend to before mailing this.

John wants a choc. cake with choc. frosting for today. He was looking for ice cream receipts but decided to buy some.

Traffic has stopped up on 41 noticeably. Ed took John out Sun. afternoon for about an hour. He said he did fine. I had John run the car in the driveway last night – I had backed it out so the coal truck could back in – Chet sent some black yesterday. Its holds heat – I mean fire better.

Mark is to take a music lesson this a.m. at 10 – Gertrude said she thought John should go into Chicago somewhere for lessons. I want to talk to her today. I called her yesterday and made Mark’s appointment.

The Koon’s took the Statons to play golf yesterday. Mrs. K. said she would come out and pay the rent today. I hope she does – it will save me getting a ck. cashed. Irene is still having trouble with her left foot. She said the only help she could get is to play golf – getting up a good ‘sweat.” She is going to a specialist in Chicago for diagnosis.

David is being a little unhappy about something – keeps wanting money – but he looses it and I told him he couldn’t have any more.

– 3 p.m. I have tried to contact Loughridge, but have had no success. Should I try Sears for an estimate? I don’t like to deal with people who don’t care enough about business to go after it. We are having ice cream & cake for the neighbor children.