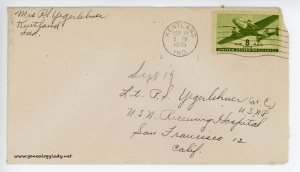 I am sitting on the front step – it is so nice out today I didn’t want to stay inside any longer. I have done a number of things today – washed, ironed, baked and a few other odds & ends. We didn’t do to Lafayette – Dorothy called and said she was suffering with a sinus infection and she sounded like she felt terrible. I wasn’t particularly wanting to go but J. & M. both had things they wanted me to get for them. Dorothy said something about going tomorrow. David is playing with an old egg cutter. He is pulling grass and putting it in the cutter but it doesn’t work. He went over to Zells this morning and got a doll and buggy without asking so I am keeping him strictly under guard the rest of the day. I tried to explain to him that he is not to go into anyone’s house. He seems to enjoy pushing that doll buggy – I think if I could get him a fair size wagon he could pull around with some satisfaction it might help. However wagons are hard to find.

The upholstery man was here today and to get the davenport done in a good tapestry it would cost nearly $100.00 – However he would completely rebuild it any style. I told him I would let him know later.

It is so warm and sunny today it seems like summer again. I hope it stays this way for a while.

Chas. Smith (Supt.) fell and broke his jaw – I don’t know the particulars but he isn’t feeling so well. John had to go see him at his home this morning about the school paper. He said his teeth were bothering him more than anything. He isn’t able to be at school. Rosemary is teaching Speech for him. I thought she had a job someplace away from here, but she has been here this week taking the speech class. 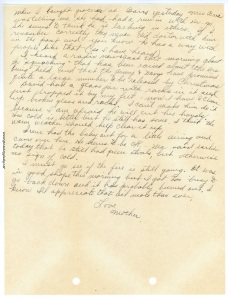 [page 2] When I bought groceries at Bair’s yesterday Mrs. Bair was telling me she had had a run in with Dr. M. She seems to think he is lacking in ethics. If I remember correctly they never did doctor with him in the past and you know he has a way with people like that (so I have heard).

I heard a radio newscast this morning about the “squacking” that has been raised about the Drs. being held and that the Army & Navy have promised quite a large number to be released by Christmas.

David had a glass jar with rocks in it and just dropped it by my feet – Now I have to clean up broken glass and rocks. I can’t make him do it because I am afraid he will cut his hands. His cold is better but he still has some. I think the warm weather should help clear it up.

Irene had the baby out for a little airing and came over here. He seems to be OK – Ma said earlier today that he still had green stools, but otherwise no sign of cold.

I must go see if the fire is still going. It was in good shape this morning but I got too busy to go back down and it has probably burned out. I know I’ll appreciate that oil more than ever.