Wed. PM and no orders or further word on anything. The only thing that makes me feel good at the moment is the fact that the commander who wrote the long telegram it seems will have to go out. He has never been out and then to put up such a “squak” made me mad.

I called Vince this AM and he wants me to come out a while this eve. He is coming after me at 1900. I’m afraid he is just being nice and don’t mean for me to accept all of his invitations but I’ll have that out with him tonite.

I really don’t know when I enjoyed myself as much as the short time I was home. It was dulled only by the fact that I had to

[page 2] leave again so soon. I’m glad now that I didn’t try to go to town and see a lot of people, etc. Maybe if I’m here a month or so I can get another such leave, at least I’ll try. I may have to take a more or less uninteresting one just to get the Great Lakes again. At least that is one thing to look forward to.

We have a new chief nurse – came while I was gone and in order to give her a send off they are having a cocktail party for her tomorrow night in the lounge of our quarters. I know it will be a grand success. Just about like some of the ones Mrs. P. used to throw. It being here on the base most people will be in a stuffy mood. I can always go to my room and shut the door.

[page 3] I sure had a good night last night since I hadn’t sleep but very little the night before. I think when I hit the bed I was asleep and didn’t awaken until 715 this AM. In all probability I snored pretty much but no one said anything this AM. I do remember turning once and bumping my elbow on one of those buttons on the mattress. I didn’t look to see if there was blood this AM but at the time it felt something like an amputation.

[page 4] good. I’m going over to the shops in a little while and see if I can talk them out of several feet. There was a note on the repair bill which said we owed Bun $2.00 so you might drop in and pay him and that will give you another excuse to ask him about the burner.

I haven’t done much with the office plans yet, but I’m beginning to believe a hallway down thru the middle of the front room might be better than along the west side. If it were along the west side the rooms would be much longer than wide. I’ll have to get down to work on 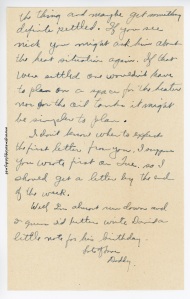 [page 5] the thing and maybe get something definite settled. If you see Nick you might ask him about the heat situation again. If that were settled one wouldn’t have to plan on a space for the heater nor for the oil tanks, it might be simpler to plan.

I don’t know when to expect the first letter from you. I suppose you wrote first on Tue. so I should get a letter by the end of the week.

Well, I’m almost run down and I guess I’d better write David a little note for his birthday –