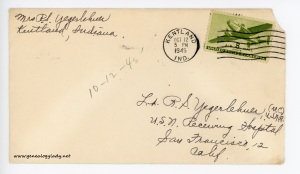 I haven’t any figures to submit but Vincent looked the office over and said he would do the work next week. I called Geo. Monroe but he was out – however he is to call me. Now I think the thing for us to do is forget about piping the heat over from Nick’s, and go ahead with the heating plant we have. I called Loughridge and Bun said they have a burner he thinks will work in the boiler and if so we could get a set up that would be our own and with automatic oil we would be better off than if we hooked on to the other plant. I measured the space necessary to locate the boiler in the back room and it would take up such a small space it wouldn’t really be in the way. I am afraid it would cost more to get a pipeline put across the alley than to put in an oil burner. At any rate I am going to proceed with the above plans as soon as I can get the men started, unless you wire me to stop when you get this. Vincent said he could move the wall up 3’ so I am having that done too. There is a radiator 3’ from the wall so that is as far up as we can move it unless we would move the radiator and I don’t think it would be worth the work to move that large radiator. I’ll draw a little plan on the back to show you how much space the boiler will take.

[page 2] It is another grand fall day. I intend to sit out in the yard and knit – I want to get my knitting out of the way as much as possible this week. I am so glad for this weather since we haven’t such a good furnace arrangement. Just hope it’s this warm next week for the carpenter. Vincent said he would work at night on the office. I stopped to see Mrs. Krull yesterday. She said she is going to have Mr. Lontz go down and clean out that backroom and white wash it. She said something about putting in a new stool if necessary. I told her it probably needed to be changed because when they aren’t kept clean they get beyond cleaning. I think she is glad to get the back end cleaned up.

I just went out to see about David. He was clomping around in a pr. of my good shoes. I put them on the back porch so I would remember to take them to the repair shop. I thought it would be warm out of doors but the wind is chilly.

Irene is out washing their front windows. She is using a cleaner like Bon Ami and says it is grand stuff. It comes in liquid form but works just like my favorite cleaner. ——- As you can see you would have a little more space in all three back rooms. How do you like the way I re-spaced the rooms – the ex[am] room can be 5 X 10 since you will have the extra length on the consultation room. As you can see the boiler wouldn’t be in the way. I you don’t want me to proceed with this just wire me or call Mon. eve.