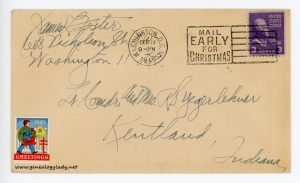 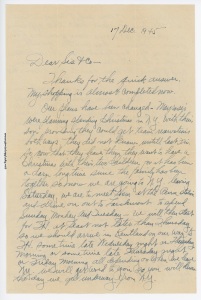 Thanks for the quick answer. My shopping is almost completed now.

Our plans have been changed – Mayroses were planning spending Christmas in N.Y. with their son, providing they could get train reservations both ways, they did not know until last Friday. So now that they have them they want to have a Christmas with their two children for it has been a darn long time since the family has been together so now we are going to N.Y., leaving Saturday, we are to meet them at the Penn station and drive on out to Larchmont to spend Sunday, Monday and Tuesday – we will then start for Terre Haute at least not later than Thursday so we should arrive in Kentland on our way to Terre Haute – sometime late Wednesday night or Thursday morning or sometime late Thursday night or Friday morning all depending on when we leave N.Y. We will get word to you so you will know the day we get underway from N.Y. 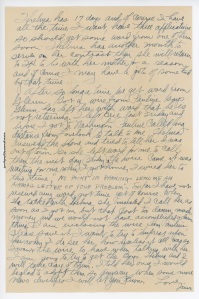 [page 2] Thelma has 17 days and of course I have all the time I want, have three applications so should get some word from one of them soon. Thelma has another month to serve on her contract then she will return to Terre Haute to be with her mother for a season and of course I may have a job of some kind by that time.

After so long a time we get word from Glenn. Got a wire from Pauline says Glenn has left her with word that he is not returning. I left Erie last Friday and before I got to Washington Pauline called long distance from Lovelock to talk to me, Thelma answered the phone and tried to tell her I was out of town so she left word for me to call, then the next day (Friday) the wire came, it was waiting for me when I got home, I wired her to this time. “NO POINT IN PHONING SEND ME AN AIRMAIL LETTER OF YOUR PROBLEM” – So far I have not received any word, not time yet of course. When she talked with Thelma she insisted I call her as soon as I got in but that cost too damn much money and we would not have accomplished a darn thing. I am enclosing the wire from Pauline. Please save it, I want to try to impress upon her when I do see her how useless it all was so I want the wire to have when talking with her. I am going to try to get the boys, Thelma and I will take care of them. I told her once I would be glad to adopt them so anyway when some more news develops I will let you know.