Debby 10 months old. Weary after yesterday’s meeting—in bed until after 9:00; Θ before arising; breakfast—rather slow in getting around to German, but by 10 o’clock, with several interruptions (phone calls, picture taking, etc.) I had made some progress. Lunch, shaved; worked further on German. About 3:30 went to call on Gazella Dodd then at 4:30 to see Daisy Jodrey. Home after 5:00; wrote two letters, one to Dr. Beck and another to the realtor in Cambridge which he recommended. Had supper about 6:30. At 7:30 Jim Bussey and Forrest Clark arrived—we had to talk over steps to be take[n] to help get Fund For Reconciliation money for Gloucester needs. This lasted until about 9:00; then we went down to Patriquins; saw movie of Debby + George Harris. Visited, came home about 11:00; worked on German; bathed; off to bed, lights out 12:07.

Passport came in mail. Debby was awake before 5:00 (!) but she was put downstairs. At 9 o’clock I was gotten out of bed by the phone; Alan Federick wanting to use our basement since he had to move his things out immediately. I worked on German some this morning, but by 11:00 was hard at work for Alan—moving his things—via his car—into our basement. Stopped about 12:30 for lunch, and then relaxed shortly. Then back to the loading and unloading. Didn’t finish until almost 4:00. I got back to work on German, but was very weary. Went to the front bedroom and relaxed, fell asleep. Got up about 6:30. We watched news; Bonnie was late getting supper. We didn’t eat until about 7:30. By 8:00 I got back to work on German. Phone call from Homer Orne. About 10:00—shortly before—I called Kent Millard in Newton Upper Falls—re: conference resolution on Vietnam; worked on German until 11:30. Stopped to bathe + have snack; off to bed; lights out 12:16.

Up at 8:35 after Θ. Had breakfast—gave Debby her breakfast while Bonnie got some more sleep. Hadn’t shaved yesterday, so began on this right after eating; while in the process Alan Federick came over with his last load of items to go in basement. About mid-morning I got to work on German; lunch about 1:00, then made progress at German. Took a coffee break about 3:30—at which time Ray + Ellen Stoner arrived from Schnectady. While they + Bonnie (+Debby) went to the Christmas Dove, I went to see Mr. + Mrs. Patience. At 5:00 I walked down to end of Bearskin Neck—to Christmas Dove, in search of the girls—but found them at home. Visited with the girls, had super—got back to work on German while they all went down to the Neck; I stayed home with Debby, studied; Debby walked about 3-4 feet (12 tiny steps); listened to Tom Lehrer when girls got home; snack, relaxed, visited, off to bed, lights out 11:53. 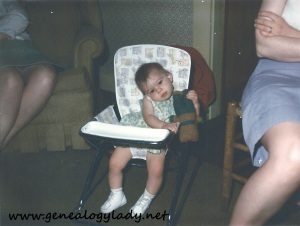 Up about 8:35—had breakfast, then while Ellen, Kay and Bonnie went off seeing sights, I worked on German. Made progress until about noon. Stopped to shave and have lunch—about 1:15 we left for Dr. Kline’s office for Debby’s regular checkup appointment; Debby is 28½ inches tall, 18 pounds—we were out of his office by 2:15. Came home, Bonnie again went out with Kay + Ellen—I napped. Very briefly around 3:30 Bob Mezzoff (?) + his wife dropped in to see the parsonage; they served here several years ago; back to German for a while. When Kay + Ellen came back, we showed them our slides—had supper around 6:30. They left by 7:00. We watched President Nixon’s new conference. Just a few minutes after this was over, much to our surprise, Paul + Marty arrived. Spent the evening visiting—showing slides; bathed about 11:00. German—off to bed; lights out 11:55.

Up not too long after 8:00; we all got up and just sat around talking for a while. At nine I went to the store for bread, then we had breakfast. After break [?] I had to tend to doing the bulletin and packing. The others went out for a walk around town. I went to the church briefly, came home, worked at my desk. Around noon shaved, the others returned, we had lunch. About 1:30 they then left for Gloucester to see Busseys. I got ready to go, then worked on German until 3 o’clock when the Ornes came for me. We drove to Natick—Fisk Memorial Church. Registered, chatted with friends—executive session got under way about 5:15—over around 6:00. We had supper at a huge hall of a girl’s school near the church. Evening session 8:00—not very thrilling; over by 9:30. Ornes brought me to the home where I’m staying; bathed, off to bed, lights out 11:41.

Up about 7:30, shaved, had small breakfast; Mr. McEwan drove me to the church—arrived about 8:30. Nothing very exciting at the morning session; had lunch with George Collis; in the morning there was some discussion among those of us pushing for a stronger Vietnam resolution. The afternoon session was likewise rather dull. At one point Jim Bussey, Dr. Uhlinger + I had an extended chat about Forrest Clark and Riverdale Church. Uhlinger indicated that an interim pastor might serve Rockport and that I could return. Bussey and I talked further—we walked to the lunch hall together—and back. After supper we maneuvered further re: the Vietnam resolution, but the evening session was devoted entirely to a resolution of black requests to the conference. Received with resistance—the older church structure fought it. The session finally ended before 11:30. Ornes brought be out to McEwans; bathed; relaxed, lights out 12:38.

Up at 8:30. Shaved, had breakfast; about 10 o’clock we left for the church—Mr. McEwan drove me. Didn’t sit in the service with anyone I knew; Bishop Mathew’s sermon was not terribly profound or original—but it was interesting, and not the least bit dull. After service went with Busseys and some others for lunch in Framingham at a shopping center. After lunch goofed off. Came back to church; I very much wanted to nap, but of course couldn’t. The ordination service was at 3:30—lasted until 5:00—it too was interesting. Who knows when I’ll go through the Elders process? After the service I joined the Ornes and we went to the Walnut High School for supper—which wasn’t too good. After supper we wandered back to the church. A suggested business meeting was not held, so I left, since I didn’t care to attend the retirement service; Kent Millard drove me to my room; relaxed, visited with the McEwans in the evening; lights out 11:15.