Up shortly after 9:00. Didn’t get much accomplished in the morning. But I did get to work on German. The mail man brought copies of my will from Loyd Starrett—very long + technical—Bonnie managed to plow through much of it in the afternoon. After lunch about 12:30, went back to German—completely by [sic] 2 page quota by 3:15. Then Alan and I went out to measure the picnic table for repairing it. We made a trip to the dump, then to Building Center in Rockport + Gloucester for redwood planks. Came home, worked briefly at the remains of the old table, then I fixed supper since it was fish. We ate about 6:30, listened to CBS news. Then sat in the yard—I studied, after a fashion (German) came in about 8:45—we went to Patriquins—(not Alan) then came home about 10:30. Listened to music briefly with Alan; bathed, off to bed; Θ, lights out 11:35.

Up shortly after 8:00—had trouble getting to sleep last night—up  still at 1:00 a.m. So it was hard to come alive this morning. But after breakfast I got to work on German. Bonnie was off for the day on a shopping trip—Alan went into Cambridge. I made some progress in the morning on German. Then took Debby with me to get groceries in Gloucester—mainly a chicken. After getting home—made preparations for supper—feeding Debby +  myself set to work on the picnic table—Alan assisting  (he got back about 1:00). We worked on the table the greater part of the afternoon. Bonnie got home after 4:30 (Alan went to Gloucester to pick her up at Becky Busseys’).—I finished work on the table–fixed supper. Barbecue chicken at the outside fireplace. After supper we sat in the yard—all  bushed. Shortly after 8:00 I got back to work on German. Spent the evening on this—read translation with Alan too; stopped to bathe about midnight; off to bed; lights out 12:50.

Up sometime around 9:00 after Θ. Got breakfast and set to work on German. By noon I had done about a page—but there were several interruptions—e.g.  mail man brought more slides, which we viewed immediately. After lunch we began getting ready to go. About 2:00 we finally left for Wellesley—we were off for Robert Peek’s—that is, his parents home at 11 Fells Rd.—they are “house-sitting”. We arrived about 3:15—and shortly thereafter we all headed for nearby Norris pond. Went canoeing—and swimming; Debby seemed quite fascinated. Bob and I did some “bobbing” [?]  on the canoe and both landed in the water. About 6:00 we came back to the house and began working on supper—grilling steaks outside. We had a pleasant supper on the back screened porch. Relaxed, visited after supper—Debby did a lot of walking; about 10:15 we began heading for bed; bathed; to bed, lights out 11:12 [after  ???? book on Queen Elizabeth]. 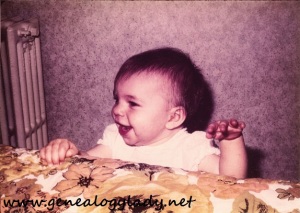 Peek’s blasted dog Thor begin getting restless about 4:00 a.m.—on the porch beside the room where we were sleeping—so we were disturbed. Got back to sleep after Debby had to be fed. Got up as Peeks we’re leaving—about 7:30. We got ready to go and got on the road about 9:00. Stopped on the way to do the shopping, but we were home by 11:00. Looked through the mail, mounted the baby-gate we bought; relaxed, got lunch—after I made a quick trip too little store—we ate lunch outside on the picnic table. After lunch I was weary—so I napped. Got sound sleep. Up about 3:30. Shaved, went to see Mrs. Leary. When I got home I finally got to my German. Made some progress by supper time—had supper around 6:30—CBS news; relaxed, had coffee with Alan out at the picnic table. Then sorted, dated, numbered the slides which came yesterday; viewed them + duplicates which came today; finally to German for rest of evening; stopped to bathe about 12:00; more on German; off to bed, lights out 1:05.

Got up about 8:20—had breakfast then set to work on German—determined that I would get caught up, which I did, about 2:30 or 3:00 this afternoon. Stopped around noon to eat and shave. After I stopped German, I went out into the yard and read in preparation for my sermon on Isaiah. Stopped about 4:00—few minutes before; dressed, then took Debby with me down to Millbrook Park to visit several of the elderly; didn’t stay long with each one. Saw Parsons, Martin, Anna +  Alvina, Leary, Bate. Home by 5:00. The Busseys came over and we had a cook-out in the yard. This was over about 7:00—at which time I did more reading on the sermon—while Bonnie +  Becky (+ her friend) went to watched [sic]  the parade; I was drowsy, napped. At 9:00 we went to watch Bonfire—really big blaze—took pictures; home about 10:30, bathed  off to bed.

Up about 8:30 after Θ.  Didn’t bother with breakfast, but went to work numbering and writing out descriptions of the slides to go to Bonnie’s folks (via my folks). Got them boxed up; about 10:00 went to the post office, changed wayside pulpit, home again—got to work on German. Had a light lunch around 12:15, shaved, got back to work on German about 1:15, after taking several pictures of Debby (B+W). Worked on German until after 3:00, then did the bulletin (typed stencil)  very lethargic—beginning to feel ill. Worked on German until 6:30—Watched the news, had supper, back to German. Then set to work on the sermon; running temperature of 100.4—diarrhea. Ugh! Finished sermon, ran bulletins off. Worked on the service—not feeling too hot—rather week; practiced sermon; more German for a few minutes; off to bed; lights out 12:25.

Didn’t sleep very well—so didn’t feel very well when I got up about 8:30. Still sick, had small breakfast, shaved, left for church. A sizable crowd—Merlin + Becky Levering were in the congregation. I preach [sic] on I Isaiah—with a 101° temperature; I left during the singing of the last hymn.  (Homer Orne gave the benediction.) I didn’t want to expose myself to people. Came home, went to bed. Leverings had lunch with Bonnie—I stayed upstairs didn’t even see them. After they’d gone Bonnie brought me a bowl of soup. Later I got dressed and sat in my chair—worked on German all day long—with few interruptions—mainly to go to the bathroom—the diarrhea continues unfortunately. Didn’t eat much all day so I am rather weak and hungry. But made good progress in German despite my ill health; bathed; small snack, OJ + toast; off to bed lights out 12.