Didn’t make it out of bed until after 9:30. I had planned to mow in the morning, but it was raining. After breakfast I made an attempt to make progress on German—but didn’t have much luck. Much of my day was spent getting my study straightened up. There was a letter from RSY in the mail—written from Bangkok. Late in the afternoon I finally got around to German again, after getting my study put in order. About 5:30 Mrs. Hannibal called—offered us a fresh codfish which a son-in-law had just caught. He brought it over—it took me about half an hour to get it cut up—enough for 8 suppers! We ate, watched CBS. John called from Illinois about arrival time next week. At 7:30 the pastor-parish committee met here at the parsonage. They seemed happy to hear we aren’t leaving. Went to Patriquins after meeting—stayed until almost 11:00. Home, bathed, read in bed; LO, 12:32.

Up about 9:30. The main preoccupation of this day was letter writing. After breakfast I went to the Cape Ann Ticket + Label Co. and order[ed] 500 more letterheads; then got to work on letters, to: Levon King; Record Cub of America; Time-Life Library of Art; Stoners; Mrs. Myers [8 photos]; Dr. Evarts [?] (a thank you); Pat + Gary Holmes—in the evening one to Rev Mark Blaising [?] in Indiana about my conference status. In mid-afternoon I went up to see Rip Hannibal; Bonnie had left Debbie at Patriquins, so I stopped there on the way back from Hannibals. Hung hook for the garbage pail. After supper I got to work in my study; got it straightened up. Read thru 2 of 4 sermons by T. P. Ferris on Elijah; worked on sermon ideas. At 10 o’clock watched brief report on Mars pictures and Lord Snowdon’s film essay on aging: Don’t Count the Candles; after the news bathed; OF read; LO 12:54.

Found myself still in bed at 10:00—I had gotten up last night and read til after 2:00. So it was a short morning. The mail man brought Newsweek with the color photos taken by Apollo 11 on the moon. Had lunch round 12:00. In the afternoon Bonnie was gone most of the time on this or that errand. I fed Debbie around 2:00. She played in the bedroom while I tried to study; did get some work done in German. Also devoted more time to sermon planning for the next few months. I have been scanning a book of sermon outlines. TV went on the blink today, but Bonnie tended to having it fixed. Had to put in a new tube during CBS news—saw the 1st and last parts of it. Went over to Alan Federicks for supper served by Diane. We chatted for a while after supper. Decided to head home about 10:00; got cats in; at 11:00 watched news; ABM appears to have passed [1]; bathed, OB read LO 12:30. 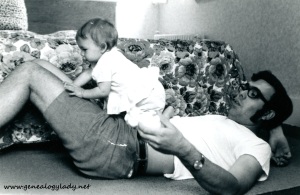 Up shortly before nine. The first thing after breakfast I clipped the hedge at the front door—very wet. I postponed mowing in order to give the grass time to dry. After working on the hedge I returned to my study—did more sermon planning. Shortly before noon I got to mowing. This wasn’t completed til around 5:00. I stopped for lunch and did a lot of clipping and trimming. Also, after mowing, filled the post-holes left from removing the fence in the picnic areas. Swept the driveway. Then helped Bonnie put up the bed in the back room. Relaxed before supper—finished Updike’s Couples. Watched CBS news, supper. Afterwards helped get the old bed frame into the attic, worked on German. About 8:30 we went to Patriquins. Left there about 10:00. Weary after so much physical exercise. Bathed, OB to read; LO 11:14.

Up by 9:00. After breakfast got to work on the sermon, which turned out to be the major project of the day. First had to organize thoughts—got to writing about noon and had made some progress when I stopped for lunch around 1:00. Mail man brought Life magazine with more photos of the moon walk. By mid-afternoon I had finished the sermon. I was babysitting with Debbie while Bonnie was off shopping. We’re thankful that Debbie is such a contented child; the twins next door are fussing continually. Got the stencil for the bulletin all typed by supper time; watched CBS news with supper. Then I got the bulletin run off and my desk straightened up. Relaxed until Diane + Alan arrived a little before 9:00. We discussed marriage ceremony and budget. They left shortly before 11:00. Bathed, OB to study; LO 12:02.

Had the best of intentions to get around to German today, but never really succeeded. Didn’t get up til after 9:30. This morning made arrangements to have the cat altered next week. Late in the morning Bonnie suggested buying a rug for my room, and moving the old one there now to the back room which we’ve just been working on. After lunch we went over to Elliots in Gloucester to place the order. We stopped to do some shopping on the way back. I was weary in the late afternoon; tried to nap some; did study German grammar a while, but did no translating. After supper I did some yard work, then got involved in helping Bonnie with the painting in the back hall. Had to do the window + high places. Worked on the service for tomorrow. Listened to the radio: WCRB Saturday Night—very good Anna Russell [2] routine; bathed; OBLO, 12:43.

Had great difficulty getting to sleep last night: an auto crash on Main Street, a window-shade flapping in the breeze, mice frolicking on the other side of the attic door. I heard the 2 o’clock chime. So was very groggy when I got up shortly after 8:00, ate, shaved, dressed; Alan Fredrick helped me get the record player to church; not very many out; a rainy morning. Alan help me get the equipment home; after lunch relaxed, dozed. Around 2:30 went to see Lucy Patience; John is dying of lung cancer. About 4:00 went over to Alan’s home for German lesson; had a long chat with Alan + Diane before getting to work on German. Hadn’t done much by 6:00 when I had to leave; fixed supper when I got home; planned to get to work on German, but was too weary; napped until about 9:00. Then finally got going on German, which I have been neglecting; stopped to bathe about 12:00; studied German grammar in bed; LO 1:05.

[1] ABM: Anti-Ballistic Missile vote taken in the Senate that day.

[2] Anna Russell, comedian known for her brilliant satire on the Wagnerian Ring Cycle.