Didn’t get up til after 10:00. After breakfast returned to translating Hebrew. The mail man brought a short letter from Bob + Nancy Peek—we hadn’t known for several weeks where to reach them. Bonnie entertain Cameron + Ezra Sesto while I studied, and the(n) visited with us while we had lunch—late (c. 2 o’clock.) Then after Bonnie went to work, I got back to Hebrew in earnest. Debbie napped—she was utterly pooped after playing with Ezra. I reached my stopping point about 6:00. Then began preparing supper, and got Debbie fed. Watch CBS news—had supper when Bonnie got home. Then by 8:00 she’d left for a Chorus rehearsal, and I began typing Hebrew translation. Made progress during the evening. Watch the 11 o’clock news, and also watched the live TV pictures of the Moon from Apollo 12—Broadcast shortly after it went into lunar orbit; OB read briefly about Vermeer. LO, 12:40

Up about 8:30    Bathed, had breakfast, shaved. Then got back to work typing Hebrew. This took my morning and early afternoon—we had a late lunch. After lunch took books back to Dr. Helen Evarts, went to the dump, came home, went to see Kay Patriquin about seeing moon-walk with them tomorrow a.m. Tried to nap a while, then got to work on my Thanksgiving newsletter. Got it written, typed and mimeographed by 6:30. After supper and CBS news, signed them, folded stuffed. Then about 8:30 took them to Mrs. Cooney—also went to Haskells to pick up a list of officer names from Karen. Came home—then began work on my Hebrew lesson for tomorrow—Deut 32. Worked on this (watched 11 o’clock news) until about 12:45—then watched CBS coverage of Apollo 12—they landed on moon safely about 1:54:35  Very precisely—OB downstairs, LO 2:35.

Got up about 5:45 to watch the moon-walk—which got underway late. And then the TV camera failed—so no visual coverage of the walk—so I went back to bed. Didn’t get up again until about 11:00. Felt pretty lousy. My main preoccupation was getting ready to leave for BU. Shaved, ate lunch, then straightened up my desk. Caught the 1:15 train. Arrived at BU about 2:45. Went to the bookstore to look for a birthday card for RSY, but didn’t find anything. 3:00-4:00 had an opportunity to chat with Beck part of the time—seminar from 4:00-6:00—left at 5:45—caught 6:46 train. Got home shortly before 8:00. Had supper, then shortly after 9:00 went down to see Drue + Sully. Stayed until after 11:00—found out that the 2nd moon-walk will not be televised. Came home, bathed, listened to radio—astronauts on moon; OBLO, c. 12:30. 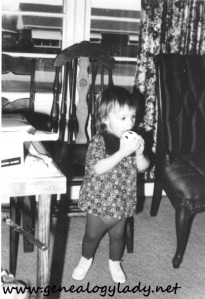 Not a very productive day. Got up about 9:30. Had breakfast, got to work only very slowly—going though a pile of papers on my desk. Watched the noon news to find out about the Apollo astronauts; they had safely blasted off of the moon. We had lunch—Bonnie not feeling too well—intestinal bug—but she went to work anyway. I shaved after lunch, then got back to paperwork. About mid-afternoon saw Mrs. Niemi [sp?] and her daughter—they came up to select a wedding bulletin. Latter part of the afternoon I spent preparing for Bible class—then around 6:00 got supper—Bonnie came home early. Watched CBS news. Bible Class arrived at 8:00: 7 in attendance besides B + myself. We ran rather late—excited discussion—past 9:30. Played with Deb; worked on translating Heb; bathed. OBLO c. 12:30.

Didn’t get up til almost 10:00. Had breakfast, then got to work at my desk. Prepared an article on Dr. Brown for the newspaper and cut a stencil for  C.A.M.P. questionnaire. Then shaved. About noon left for Gloucester. Ran off the stencil on Wesley Church’s machine (mine doesn’t work too well) then went to the newspaper. Got home about 2:00—Nixon’s nominee for the supreme court, Clement Hainsworth [sic], was rejected 55 to 45 in the senate. I wrote several letters, then after Bonnie went to work, Debbie + I went for a walk, to P.O., church, then to Richdale’s for cereal + milk. When we got home we both napped. At 6 o’clock I began work in the kitchen, getting supper, making brownies, watched CBS news. Ate when Bonnie got home. The evening went very quickly—got ideas together for sermon  HAIRCUT – to bed by 11:30.  Θ

—President Kennedy killed six years ago today—Up by 8:30. After breakfast and shaving I went down to the church to see how preparations for the fair were coming along. Then went to buy a card for RSY for his birthday. Came home, and babysat while Bonnie went to work at the fair. I worked on my sermon. Bonnie came home about 12:30, then I went back to the church, had lunch, and sat with Roger Smith and Marg. Arlington. Then had discussion with some of the women about drugs. By 2:30 came home—played with Debbie, relaxed, tried to nap. About 4:00 or so Bonnie left on a trip to Gloucester, and I got back to work on sermon. Watched NBC news at 6:30, had supper. My evening was spent getting ready for tomorrow; finished sermon, did the bulletins.—then prepared the service, looked over SS lesson. Bathed, OB, read; LO 12:15.

Up about 8:30. Had breakfast, shaved, dressed, greeted my Sunday School Class at 9:30. This was over by 10:30, went to the church—small crowd for thanksgiving. Preached on Thanksgiving in the Bible. Had lunch when we got home—Debbie had quite a time playing with the piano. I took the front of it off so that she could see the hammers in action—took 3 pictures. Then wrote a note to dad—his birthday is Tuesday. At 3:30 went to Youth Group Steering Committee at Baptist parsonage. Home shortly after 5:00. Went about getting my study + desk put into order. Ate about 6:30. Played with Debbie after relaxing. Then about 8:00 got to work on Hebrew. Worked at this until about 10:30. ^ —bathed^  Debbie was given her first pocket-book this evening—they fascinated her—Bonnie gave her an old one; OB, read about Vermeer  LO shortly after 12. Θ