Couldn’t get to sleep last night; got up about 2:30—read until 3:00—then back to bed—downstairs. Didn’t get up til about 10:00—feeling lousy. This was going to be a day to make a lot of progress on Hebrew, but it didn’t work out that way. What morning I did have I went about straightening up my study and desk. Bonnie went to Gloucester shopping—this by the way, is the 7th or 8th consecutive day of rain. When she got back we had lunch. Then I went to the building center for odds and ends: hooks for the garage door, which I put on when I got back; then til 4 o’clock worked on the door at head of back stairs—to keep Debbie from falling again. Then from 4:00 til 6:30 I worked on Hebrew; got supper. CBS news. We ate when Bonnie got home. She went to Chorus rehearsal. I worked on door again til about 9:00. Then to Hebrew, until about 11:45—stopped to bathe. OB, read about Vermeer; LO, 12:44.

Bothered by insomnia again last night—was still awake at 2:30.  So today have felt pretty washed out—didn’t get up until about 10:00. But before lunch I did get several pages of the Hebrew translation typed. In the afternoon Bonnie went to work from 1:00 til 5:00.  I stayed with Debbie and worked most of the time on Aramaic—made about 80 new flashcards, and later in the afternoon began translating in Daniel. We had supper about 6:30—watched CBS news. About 8:00 got back to work, worked further in Daniel—writing out translation. Then took time to re-read my report for Deut. Seminar which I will read tomorrow—(no time last week). Then typed out the Aramaic translation. Then by 9:30 couldn’t do anything more—too tired.  Stopped to bathe. Then went to bed to read for a while—in the art book on Vermeer. LO  c. 11:15. Θ

Still insomnia last night! But I did finally get to sleep (after a snack, + in the bedroom downstairs); up about 10:00. Had breakfast, shaved, talked briefly with Margaret Rilley on phone (she called)  about Alan; caught the 15 train to Boston. Arrived at BU about 12:45—Had my lunch. Before Aramaic class worked on Hebrew. Aramaic 2:00-3:00; then worked further on Hebrew. Seminar as usual from 4:00 to 6:00. I presented my observations on laws in Deuter. 22;  had to leave class early (5:45)  to make sure I got the 6:40 train. Got home shortly before 8:00.  Had supper, relax, played with Debbie. Read the evening paper, read in New Republic, then finally turned to doing Hebrew again. This morning called Jerry Lewis (met  him + his wife Sunday at church)  they are going to Wash. D.C. for peace march. Will see them when they get back. –Bathed about 11:00; watched news; more Hebrew; OB, read about Vermeer; LO 1:05. 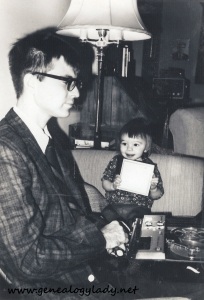 Debbie with her uncle Paul, November 1969

Some trouble with insomnia again last night—but not as much. But didn’t make it up til about 10:00. Had breakfast; when the mail arrived I tore open the end of my rt. thumb swatting at the cats (growling at one another).  About 11:30 went to see Dr. Helen Evarts [?]; borrowed a book and had a chat with her. She’s recovering from heart attack. About noon returned home, listened to news. After lunch Bonnie took Sully to vet: had rabies shot and altered. Bonnie returned home in time to get ready to go to work. I spent the afternoon on Hebrew until about 4:00—when I turned to prepare the Bible lesson for tonight. Fix supper about 6:00. Watched CBS news. We ate when Bonnie got home about 7:15. Read the paper til Bible class arrived: 6. This broke up about 9:30. We called Paul to wish him happy birthday. Studied Hebrew. About 11:45 phone call from Don McGaw—just wanted to talk about parishioners—we hung up at 12:30. Worked on Hebrew more. Then got ready for bed. OBLO 1:25.

Slept well last night, but didn’t get up til about 9:30. Had breakfast, worked on Hebrew translation. Then late in the morning watched the launch of Apollo 12 (11:22)—a few tense moments at the beginning—the rocket may have been struck by lightning. After lunch went to the church to change wayside pulpit. Came home and got to work on Hebrew—typing translation. This proved to be an all-afternoon affair—Bonnie was at work, Debbie asleep—so I made progress. Stopped at 6:30 to see news and to start supper. After Bonnie got home (about 8:00, she’d stopped at Busseys on the way home) we then prepared to go to Gloucester—to shop at Mal’s for odds + ends. We got home about 9:45. Puttered around at a few things, then got back to work on Hebrew. Then stopped about 11:30 to bathe. Then to bed, read more in Vermeer book; LO 1AM.

Didn’t get up til almost 10:00. Had breakfast, shaved, then began working on sermon. Got two letters—one from Uhlinger to the effect that I’m a member of N.E. Conf., one from Mueller to the effect that I am a member of the S. Ind. Conf.!!  Kept at work on the sermon, before + after lunch. Worked at it until about 3:00, then went to see Hannibals—then stopped to see Patriquins briefly to pick up Bonnie’s hat. Then visited with Lucy Patience. Then at 5:30 went back to Hannibals to watch telecast in color from Apollo 12 (c. ½ way to moon)  Was home by 6:30  Had supper; then had to get back to work on sermon. Finishing sermons and doing bulletin took all evening. Watched late news: huge peace rally in Wash. DC.  Probably well over ¼ million—but marred by violence at the conclusion—still very satisfying—largest rally in our nation’s history. Bathed after midnight; OBLO 12:45.

Up about 8:30. After breakfast and shaving, dressed and practiced the sermon. No Sunday school class—Karen Haskell is away. Went to the church about 10:35. Preached the second sermon on Revelation. Got home about 12:30. Had lunch (after taking one picture of Debbie—she’s 15 months old today). Then after lunch, when Bonnie was taking Debbie out for a walk, took 2 more pictures. The bulk of my afternoon I gave to Hebrew translating. Had supper about 6:30—then got back to Hebrew. Took time out in the evening to play with Debbie. Then back to work on the Hebrew after I worked on getting a notice mimeographed about Methodist Men meeting this month with Dr. E. K. Brown. After they were done, I worked on Hebrew. By 11:30 had finished chpt. 10 in Deut, then I turned to addressing envelopes, stuffing, etc. Finally stopped to bathe about 12:30. OBLO c. 1 AM.