Up late—in view of the hour when I got to bed—about 9:45. Had breakfast, then went over to Wesley Church in Gloucester with my 13 stencils. Finished up by about 11:45. Came home, had lunch, watched the noon news. Shaved. At 1:00 I watched the special CBS News coverage of the vote on G. Harold Carswell to the supreme court. Cause for rejoicing! He was rejected, 51 to 45. I then read through my paper and left for BU at 2 o’clock. Got there just about 3:00. Ran various errands + made tea with Dr. Beck for seminar. I was stage center today—I read my paper: The Use of the OT in Matthew. I didn’t have to field any impossible questions. After class was over I invited Ned Albee + family up to Rockport in May. I left BU at 6:15—arrived home about 7:15. We took Debbie down to Drue + Sullys—then went to Wesleyan Fellowship. There were 10 there. After supper there was discussion. There was no decision to disband. Rather they will meet quarterly—and the money will be held onto—with the youth group a priority item. Next meeting will be a barbecue in June at the parsonage. We headed home—or rather to Drue’s—9:30. We were home by 10:00. I was weary.We bathed together, OBLO, 11:07 Θ+

Up about 9:00. Had breakfast, then got right to work on Aramaic—the whole assignment had to be done. And I kept at it pretty consistently until about 3:00. I did take time out for lunch, to shave, to stroll around the yard—the temperature was up in the 70’s. Carol Lewis came over just as we were finishing lunch—and Bonnie took her home just before 3:00. At just 3:00 I left by car for Boston. I arrived at class just 1 or 2 minutes late. Class from 4:10–5:30. But I didn’t get away from BU until about 6:00. Arrived home just about 7:00. Had supper—watched What’s My Line? Then went to visit a new family in town: the Kohle’s [?]. She was originally from Rockport—they’re about 50—will be transferring membership to our church in a few months I gather. I was home by 9:30. Then turned to several things: made out post card re: Administrative Board meeting—got a phone call—play reading is this Sunday evening, did some up-straightening in my room—but not very much. I listened to the tape which Don McGaw made for me—he recorded the small record of Pope John XXIII which I borrowed from a seminar member—I’ll be playing part of it this Sunday. At 11 o’clock watched the news; also bathed together, watched an hour of Johnny Carson; read briefly OBLO 1:10.

We allowed ourselves the luxury of staying in bed til late—not up til about 9:45. The very first thing I went to the P.O. with cards to Administrative Board members—also changed wayside pulpit. When I got home I had breakfast. The rest of my day was spent at my desk—trying to plow through the mountain of clutter. We had lunch about 12:30, Bonnie left for work. Debbie played all afternoon—I was at my desk all afternoon. Among other things I got the pre-registration organized—about 25 so far. Late in the afternoon I put on the beef—began preparing supper. Bonnie got home about 5:30—I had supper just about ready to serve. Late in the afternoon I made a start on Alden Hatch’s book, A Man Named John: The Life of Pope John XXIII. We had supper—left Debbie with Kay Patriquin, went to Gloucester to the 7 o’clock show: They Shoot Horses, Don’t They? The acting was quite good, but it was a depressing story if there ever was one—not really what I was in the mood for after a long week. We went to Patriquins. We showed them our latest movie—and one about a year old—it’s hard to believe the difference in Debbie. We came home about 10:30. Relaxed, read newspaper. Watched news, didn’t bathe. OLBO 11:53.

Not up til about 9:30 (?)—after Θ. I immediately went down to the Baptist church with the leaflets to be handed out by the JYF kids—then came home, had breakfast. Then got to work reading Hatch’s book on Pope John—in preparation for the sermon. I shaved about 1:30. Then ate lunch, then went down to Patriquins to watch the launch of Apollo 13 on their new color TV set. It was the first time I’d seen a launch in color—and it was quite spectacular. After a few minutes (when they started showing dignitaries after the launch, e.g., Agnew) I left. Came home, got back to work with the Pope John book. Read until 6:00—the(n) watched news—Apollo 13 has been blasted into a lunar-bound trajectory. We fixed supper. Then I got back to work on the Pope John book, which I wanted to finish before starting on the sermon. I finished about 9:00—but then wanted to do the bulletins. Had to call Ornes—also had a phone call—so they slowed me down. Got the bulletins done about 10:30. Had a piece of pie, then finally got started on the sermon after 11:00! Stopped about 1 o’clock to bathe—finished sermon about 2:30—wrote this—as the handwriting indicates! OBLO, c. 2:30. 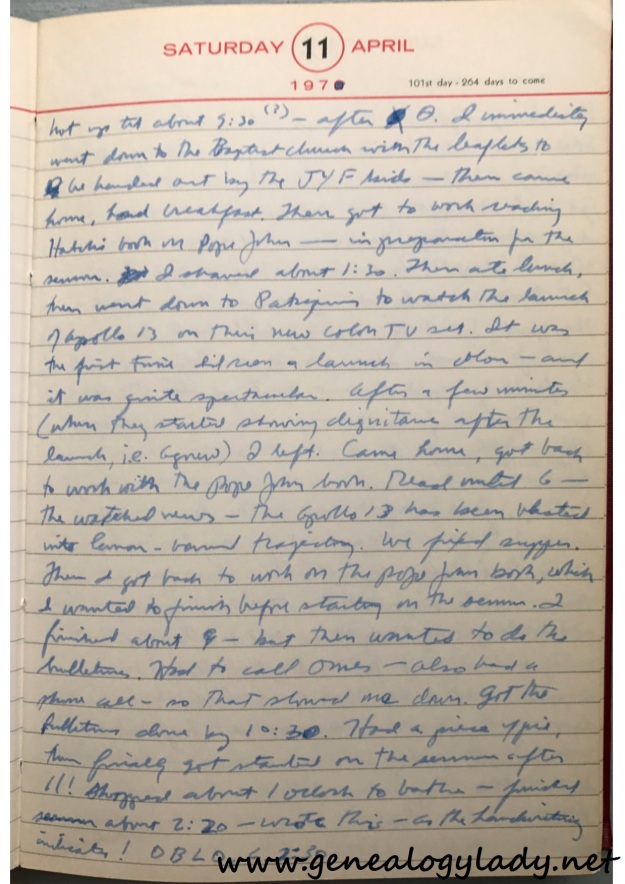