Up before 9:00. Had breakfast, shaved, Long phone chat with Gladys Haskell. Wrote article (very brief) for the Eagle. Then I started out on various errands. I took the article to the Eagle. Went to the P.O. Changed the wayside pulpit at the church—indicating next Sunday’s Hymn Sing. Also went to the Orne’s; I wanted to check the minutes of the Annual meeting for the exact wording re: the committee for talking with the Episcopals + congos. I was home slightly before noon. Debbie is better today, but Bonnie continues in poor shape. I fixed lunch—cleaned up. In the afternoon I tried to get reading done. I napped briefly at one point. Debbie doesn’t feel like being quiet when she’s sick, but we couldn’t let her out of the house. So she was getting tired of being confined. Late in the afternoon I wrote the letter of recommendation which Carl Sesto asked me to write—to Dean Musfelder [?] at Endecott Jr College. Also wrote them a note that I’d done it. Shortly before 6:00 I took this to the P.O. Also the envelope for R. Villars to send back my JBL in. [1] When I got home I fixed supper; watched CBS news. I cultivated around our strawberries and tomatoes. But most of the evening I spent reading; late I took a break to get the kitchen cleaned up from supper. I finished Wurthwein TOT about 12: 20, then OBLO, c. 12:35.

Up about 9:30. It was one of those mornings when I was very lethargic—just couldn’t get going. And my efforts to get to studying were several times thwarted. Debbie hasn’t been outside since Sat. I believe—and she’s been very restless and bored. So in her search for interesting things to do she explored her diapers—and decorated her room with the contents. That mess then had to be cleaned up. She had to have a bath. I got a little reading done before we decided to get lunch. I had to go to Richdales for bread + milk before we could eat. After lunch I went to the drug store for more cough medicine, then I made a trip to the dump. Then I got back to reading. I took one break to pick strawberries, this picking was for Garcias. More reading, then about six I went to the garden, picked snowpeas and lettuce—the garden is coming along well. We had supper, watched CBS news. We got a call from Stoners—they’re coming a week from today. We left Debbie at Patriquins at 7:45 and went to see a movie, Paint Your Wagon—an enjoyable “fun” movie. We got back to Patriquins about 10:30. Then came home about 11:00. Had a snack, read a while; OBLO, c. 12:00.

We were in bed til late—not up until almost 10:00, after Θ. I had only a small breakfast, then got to reading the Jeffrey article in IB. [2] I wanted to get this finished as soon as possible. But there were interruptions. When the mail came there was a form letter from the new D.S. [3] Mac White—calling for a meeting next Tuesday evening in Lexington. So I had to do some calling regarding that. When I finally did finish the Jeffrey article it was early afternoon. Then I scoured out the bath-tub—Bonnie is not feeling strong enough yet to do that—then I shaved and bathed. Then went to Richdales—finally had lunch, just before 3:00! After lunch I wrote a letter to the Editor of the Gloucester Daily Times regarding the smoking ban on commuter trains. I went to the P.O., stopped briefly to confer with the Ornes, then went to the garden. I picked quite a lot of snow peas. I got home a few minutes before 6:00. Cleaned some of the peas, took them to Lucy Patience; came home, had supper, watched CBS news. At 7:30 went to St. Mary’s Church for meeting of the Joint Church Committee—Epis, Cong. + Meth—exploring common possibilities; we discussed church school. I was home about 10:00; got to reading—read prolegomena to Biblia Hebraica, glance through Nielsen’s Oral Traditions; OBLO midnight.

We weren’t out of bed until about 9:30. I immediately got to reading—in Edward Nielsen’s Oral Traditions. I had hoped to be able to get this book finished in a day, but it didn’t turn out to be quick reading. Quite the contrary—the author isn’t nearly as coherent as one would like. I arrived at a stopping point shortly after 12:00. Had lunch—read in Newsweek. I got back to reading about 1:30. I got drowsy—dozed a little in my chair. Read til about 3:30—then I stopped to make some signs for Sunday’s hymn sing. Bonnie went shopping, took Debbie along. I went down town to distribute the signs—bought a copy of Playboy—looked through it when I got home. Then returned to reading. The Garcias have guests—arrived in the afternoon—3 kids—so now the noise level around here is even higher. When Bonnie got home from shopping I helped fix supper—got ½ hour more reading done. We ate at 6:30, watched CBS news. Then I read some more until about 8:00—at which time we went down to Patriquins to watch Ironsides. Afterwards “mug-ups”—with the spice cake which Bonnie baked at supper-time. About 10:00 we headed home—and I returned to reading Nielsen—which I did until about 11:40. Prepared for bed; OBLO, 12:07. 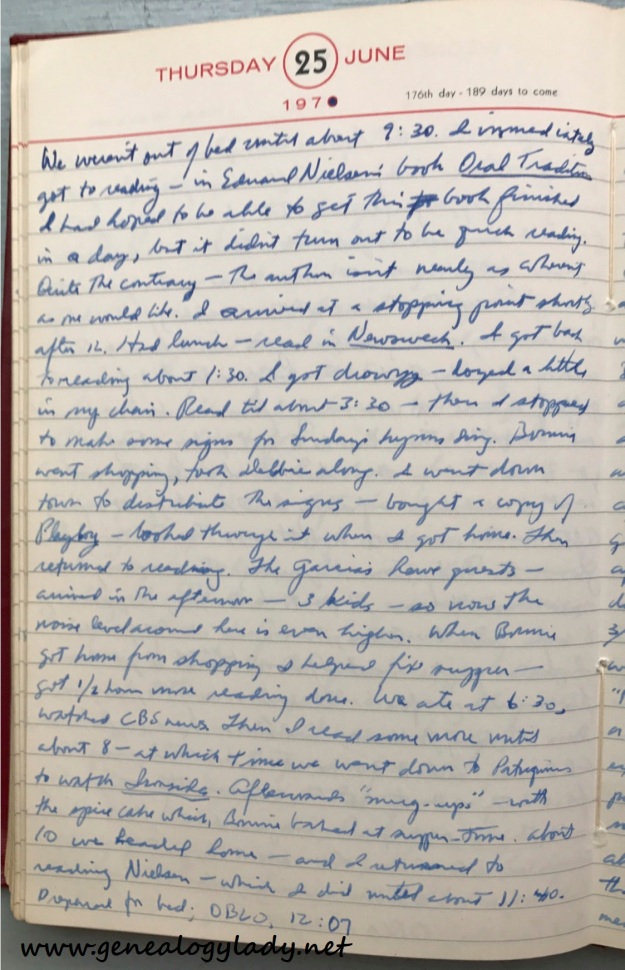 [3] District Superintendent; the church official who oversaw the local clergy, and reported to the bishop.