Up about 8:15. Had breakfast, shaved, went to the church. The two banners were up in the sanctuary—so I preached on the two sayings—“True peace is not merely the absence of tension, but it is the presence of justice and brotherhood” (Martin Luther King) and “Love is the most universal, formidable, and mysterious of cosmic energies” (Teilard de Chardin). Early in the afternoon, after lunch, I napped for a while—at least tried to. Then I got to work reading—still plodding away with the intros to the prophetic books in the IB. During the afternoon Ruth Robinson dropped by to pick up two books which she’d called about yesterday—we had a chat with her for a while. By supper time I had finished the IB intros—and the intro to Daniel. We had supper, then went for a walk. We walked down Bearskin Neck and back. We stopped to talk with a portraitist—Dr. Beck wants info on portraits. But we also talked about a portrait of us—we’ve been thinking about having a charcoal sketch of Debbie done for both Bonnie’s folks and mine. On our way home from the walk we tried to get Debbie to recognize the moon. We got home shortly before 9:00. We’ve been trying to communicate our feelings frankly to one another the last month—we had another session re: sex. We were in bed by 11:00. Θ

Up by 9:00—but can’t recall exactly when. Had breakfast, shaved. Wrote my article for the Eagle. After 10:30 I took it to the Eagle office, stopped in briefly to see Esther Longley at the Den-Mar (I had to return a copy of Guidepost which I borrowed from her on Saturday—it had an article by Walter Cronkite), then went to the church; changed the wayside pulpit. When I got back the mail was here: there was a birthday card for Debbie, a Japanese card from the folks in Nagasaki. I got some reading done before we had lunch. My main concern for the rest of the day was reading: Jeffrey’s exegesis on Daniel in the IB. I made progress. Bonnie was at work and Debbie was asleep or entertaining herself. When Bonnie got home from work about 5:45 I went to the garden and picked several ears of corn—came home, helped with supper. Watched CBS news. After this I was able to get some reading done before we went to the show about 8:45. Mora stayed with Debbie and did her laundry. We went to see “Z”—a drama—yet a documentary about the politics leading to the military dictatorship in Greece. We got home about 11:30. This excellent film touched off a discussion with Mora until about 12:30. She left, we bathed, OBLO c. 1:05.

Θ about 7:30 or 8:00—slept again. Didn’t get up until about 9:30. Had breakfast. My main concern for the day was to get reading done in Jeffrey’s exegesis of Daniel in the IB. I devoted what was left of the morning to this; went down to Richdale’s shortly before noon to get bread. We then had lunch. Bonnie went to work. Debbie napped, played in her room. Early in the afternoon I shaved. Also did calling to parents of our Sunday School children asking whether they preferred Sunday or Wednesday. About 2 o’clock Homer Orne came by to pick up 15 tickets for the chicken barbeque. He reported that Bob Mezzof (?) had been seen in town yesterday—had stopped in to see the church and was impressed by our new banners. After he (Homer) left, I got back to reading—but I gave in to drowsiness and had a nap in the middle of the afternoon. But then I got back to reading—which I continued with until Bonnie got home. We had supper, watched CBS news. In the evening Bonnie went with our new neighbor David Herlihy to the traffic meeting—so I read all evening until they got back shortly before 10:00. Right after Bonnie left I played with Debbie for a while. She’s trying to say “truck” —but it’s coming out a very clear “fuck”! David H., Bonnie + I chatted for a while when they got back; I read more, relaxed; we bathed together; read, OBLO, c. 12:30.

Up about 9:00. After breakfast I turned to my reading—plodding on with Jeffrey’s exegesis of Daniel in the IB. I kept to this pretty steadily until lunch time, which was about 12:30. I shaved after eating, then got back to work. I finally finished Jeffrey about 4:10. I wanted to start in Ginsburg, Studies in Daniel, but really didn’t have the ambition. So Bonnie and Debbie and I—along with Mora + the kids—spent some time out in the yard. Bonnie didn’t feel like cooking supper, so the three of us, shortly after 5:00, went over to Gloucester, got some Kentucky Fried Chicken dinners, then drove over to Mount Ann Park. We had driven by this spot hundreds of times in the last 2½ years—but never stopped. It really is quite lovely. We climbed all the way to the top—had our supper on the open flat rock area. We got home about 6:45. Had time to change clothes, relax. I had a meeting at 7:30 at the Episcopal Church—the Joint Church Committee. We made further arrangements re: the joint Sunday School. Home about 9:00. Relaxed, tried to read, but Ginsburg will take real concentration; iced the cake—we had a snack then, watched 11 o’clock news; bathed together. Sat out in the yard watching meteor shower; OBLO c. 12:30  Θ+ 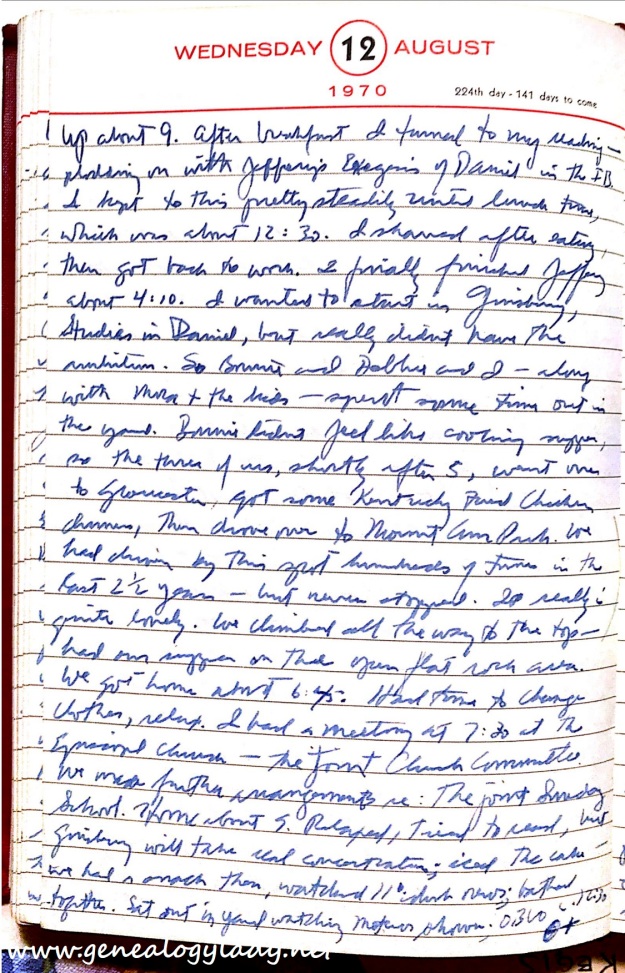