A rather slow and short morning. Not up until about 10:00I suppose—after Θ. Did some puttering at my desk, spent some time with the mail when it came. Shaved. About 11:45 went to the Post Office to mail my letter to Mrs. Myers. Stopped briefly at the church to change the Wayside Pulpit—i.e., remove the NUVA announcement. Had a brief chat with Virginia Bate on the street. Shortly after getting home we had lunch. Early in the afternoon Bonnie went off shopping in Gloucester, Debbie settled down for a nap. I got down to studying; OT reading Ezekiel 34-35; NT: Luke 5. I cannot recall ever having made a point to read Luke—I can’t recall having done a paper on any of it—like I have on the other 3 gospels in some form or another. I am struck by its peculiar nature—for some reason I like it better. Began reading Albright’s From the Stone Age to Christianity. I have had this book for many years—can recall reading it when I was at IU-summer school 62 or 63. But it’s all new now. Read until late in the afternoon. Then spent some time doing preliminary designs for new banners—my answer to Marrs! Not long after Bonnie got home we had supper, Then prepared to leave for Town Meeting. We left Debbie with Kay Patriquin. The meeting concluded tonight shortly after 11:00, after covering articles 32–81. Howling snow/sleet storm kept attendance very low. Picked up Debbie, came home, had snack, relaxed, read, OBLO.  c. 1:10.

Up shortly after 9:00 due to a phone call, but I went back to bed for a few minutes. Got up, even before eating went to the church and turned on the heat. Came home, had breakfast. I gathered together a few things for banner making—just as I was ready to leave the house Jack Roberts called to offer thanks for my help with NUVA. Just as that conversation was over the mail man arrived—a letter from Bonnie’s folks—they hope to be arriving in Boston in late August. Enclosed in the letter were 3 snapshots (same, one for each of us, P + M, Gdma). I went to the Congregational church, saw Ed Nutting briefly, then went to our church, worked on banners, made quick trip back to the Congreg. church for the paint brushes I’d forgotten. Worked on the banners then until about 12:30. Came home, ate lunch, worked on reading Albright’s FSATC—then about 2 o’clock went back to the church. Worked on banners for the afternoon. My Sunday School Class was supposed to arrive to help with the banners, but none showed up. I wasn’t alone, however. The boys in the rock group were there practicing. I finished 2 banners; quit about 5:30. Came home, relaxed, had supper. This was the first evening for relaxing in a long while; watched CBS news and other TV. Started going through the stack of old New Republics—taking out articles to save. Watched Nixon’s news conference on foreign policy—also Ironside. Then we went downstairs; had snack, bathed. OT reading: Ezekiel 36; NT: Luke 6. Very weary by the end of the day; Town Meeting is a strain; OBLO c. midnight  Θ

Didn’t move too swiftly this morning. Up between 9:30 and 9:45. I had breakfast, then shaved. 2 days worth. The mail man arrived shortly after I’d finished with this. My check to Fleishman’s Yeast ($1.50) for a cooking thermometer was returned to me: I’d forgotten to sign it! I got that ready, then about 11:30 went to the Post Office and to the church. Turned on the heat for Vicky’s organ lesson in the afternoon. Did some work on the banners, i.e., took wood pieces off of two of them, to be transferred to the new ones. Went from the church to Richdales, where I met Winnie—she told me Vicky is ill, so the heat needn’t be on. She stopped by the church to turn it off. I came on home; while I was eating my lunch she stopped in briefly to see the new carpet. Bonnie left for work, Debbie was still asleep (she had no lunch). I spent the afternoon working on my sermon. 3 whole pages on Vietnam—Alex and Alice will be furious! Two callers in the afternoon—Ruth Robinson returned Pedersen books; Mrs. Hardy brought Sunday’s play by. I had sermon rough draft 99% finished and supper under way when Bonnie got home; she’d stopped in Gloucester to purchase a seat for Debbie (to raise her up at the table) and a super-large [???] lamp for my desk. After supper we watched CBS news, etc—and I did more clipping from old New Republics. Except for the Odd Couple at 9:30–10:00 I spent the evening on the final draft of my sermon. OT reading: Ezekiel 31; NT: Luke 7. Bathed about midnight, read briefly in Albright  OBLO  c. 12:45. 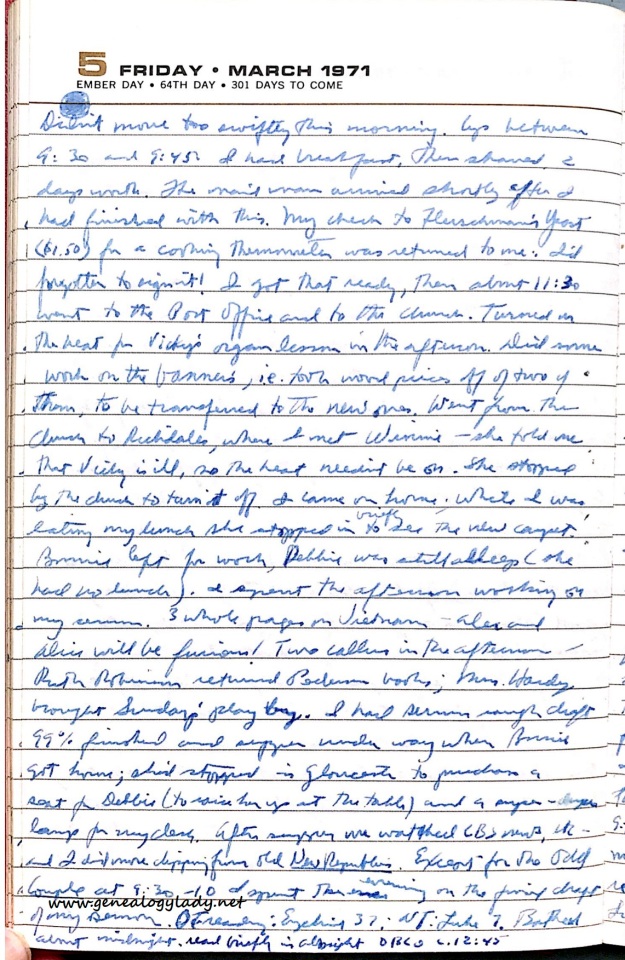