A busy day—on the go—once I got started. Up about 9:30 after Θ (w/o o.) Shaved, had breakfast, went to the church to work on banners. Got two news ones put up: “O Magnify the Lord with Me” and “Let Us Exalt His Name Together”—got home shortly after noon. This was the day that the Sestos were scheduled to come, so since they weren’t here yet, we called—and they’d forgotten all about it—so they’re coming in two weeks. After eating I set off on an afternoon of calling. Went to see the Hannibals. Met their daughter Janice—also saw Rip, Jr. and his wife. I showed them the letter from Alice + Alex. Rip and Florence were horrified. From there I went to see Bertha and John Wicky; had a pleasant visit. Then about 4:00 I went to see Charles O’Reilley—he had lost some fish—same problems that we’d had; it simply take patience and determination. Came home about 5:00. Had supper, then lay down for a nap. Didn’t actually slept, but I did feel somewhat refreshed. About 7:00 I went to the church to finish banners. This took me til about 9:30. I finished the two: “By Him we are called to hear his word” and “By him we are called to do his will.” Rearranged the banners, cleaned up all the banner making mess. 9:30–10:30 did the bulletins after getting home. Then mimeographed Parish News Service; + new set of rules for the rock group; prepared the service. OT: Ezekiel 38; NT: Luke 8. Bathed about 12:45. Practiced sermon. OBLO 1:25.

Up about 8:00—snow had been predicted, but there wasn’t anything coming down yet. Shaved, had breakfast, practiced part of the sermon before my class arrived—3 came. I went to the church about 10:30. This was the morning the banners were supposed to be taken down according to the Marr ultimatum—so I guess we won’t get their $50.00 for the paint fund. I preached on the 6th commandment, You Shall Not Kill—and devoted about 3 pages to Vietnam, stressing our guilt in killing that is done in our name and which we help to pay for. Both Alice and Alex were visibly agitated. Got home about 12:15. Bonnie drove Linda Cameron home—she’d stayed with Debbie (she hadn’t been to SS class, but came when we called to ask her to—Vicky is sick). After eating we all went down for a nap. Θ sleep. About 4:00 or 4:30 we were awake—there was a ring at the door. I dressed hurriedly—it was Homer with our check which he’d forgotten to give us. We had a long chat with him. Then not too long after he left, Dick Short paid a call—he’s running for selectman—election tomorrow. After he’d gone we fixed supper, then went over to see Aimee—Virginia wasn’t there. I had agreed to let Aimee see a copy of my sermon. Got home about 7:15. Left Debbie at Patriquins, drove to Rapps for play reading—Private Lives (Noël  Coward). Bonnie had the lead. To Patriquins about 10:30. Home about 11:00; OT: Ezek. 39. NT: Luke 9. Relaxed, tried unsuccessfully to find an old article on Vietnam I’d written. OBLO c. 12:40.

Up shortly before 9:00. Had breakfast, then got to work at my desk. I wrote a brief article on Bishop Mathews, going on the fact sheet which his office gave me. Also wrote my usual article of church news. While I was doing this Bonnie went to vote, Debbie was occupied with Sesame Street. When I finished my articles, I shaved. The mail man came just before I shaved. A letter from Busseys. They seem to be getting settled alright in Arizona—they mentioned that Paul and Marty wrote them inquiring about Arizona. So, who knows, perhaps P + M will end up going out there. The climate is certainly better. After shaving I drove to the Eagle office with the two articles, then went to vote. Voted for Dick Short for selectman; Eleanor Hoy, school committee—voted against Hazel Bell Brady. Got home just about noon. We had lunch. After Bonnie left for work, I napped a short while—Debbie was already down for a nap too. Don McGaw called—re: how much the rock group charges—their figure of $125-150 was far too much. The remainder of the afternoon I spent backing and reading. I baked a loaf of anadama bread [1] and a chocolate cake. Had supper all on the table when Bonnie got home. I frosted the cake after we ate. John Ingerman called and offered to pay $20.00 more if the rock group can practice on Tuesdays as well—I agreed. Watched CBS news etc. Bonnie went to Chorus rehearsal. I read, put Debbie to bed after a play session. OT: Ez. 40. NT: Luke 10. Spent a good part of the evening reading in Albright FSATC. Snacked when Bonnie got home; read; bathed. OBLO shortly after midnight. 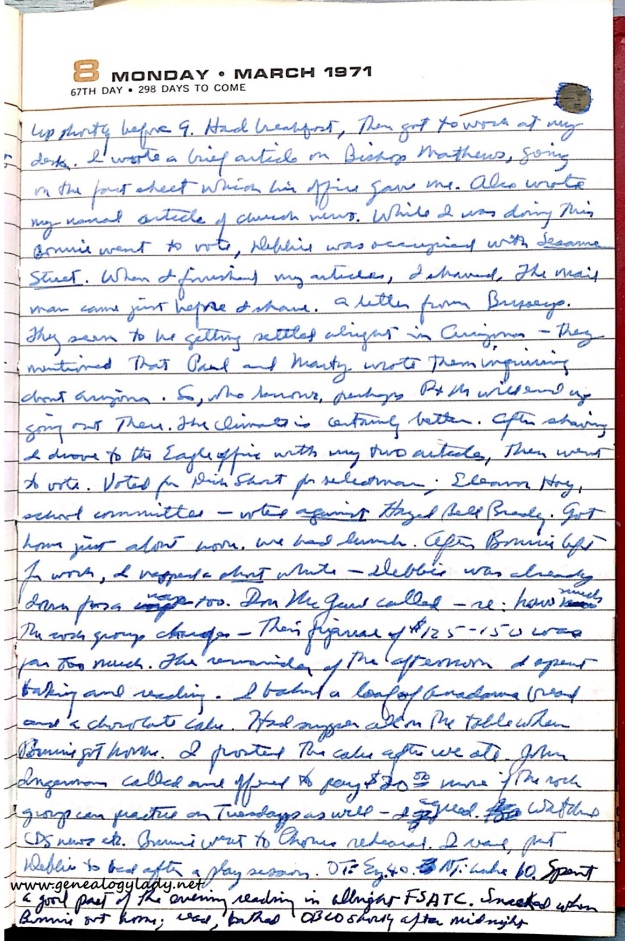