Up at 9:00. Had breakfast, shaved. I was on the go for most of the morning. I went to the church to pick up the music for Lois Clapp to practice for Sunday. Then went to Ed Nutting’s office. Picked up the advert. he had made up for Bishop Mathews visit. Lois was at the organ, I gave her the music. After chatting with Ed for a while, I went to Gloucester. Went to the Gloucester Daily Times office—I arranged for the two adverts on Wed and Friday, also spoke to Peter Olson about getting an article about the Bishop, as well as pictorial coverage. Went on to Norman Office Supply, and from there to Mals and Stop + Shop. When I got back to Rockport I stopped at the church and changed the wayside pulpit—picked up some milk, arrived home about 12:15. Bonnie had lunch on the table. After eating, Bonnie left for work, Debbie and I played together briefly. I lay down briefly. Call from Bishop’s office, with the word that he and his wife will probably join us for lunch—also sermon title and scripture. I read the COCU paper for tonight. Also wrote my weekly letter to Mrs. Myers; then turned to reading in Albright’s FSATC. Getting into an interesting section, dealing with ancient man, stone age etc. I had supper ready when Bonnie got home. Relaxed with the paper after eating; watched CBS news, clipped more articles from Old New Republics. 7:30–9:30 C.O.C.U. meeting here—a good group. Mostly old people—but most of them open minded—I hope it rubs off on my members! Snacked, read; OT Ez 41  Luke 11; OBLO c. midnight  Θ

Up about 9:00. One of the first things to attend to was the heat—or rather, lack of it—at the church. Even before eating I went to the church, went to the basement to read the fuel gauge—it appeared to be empty. When I got home I called the Building Center—they said they’d look into it. Had breakfast. Later got a call from them; fuel had just been put in yesterday—so they’ll send a service man—within the hour. Bonnie went to Gloucester to pick up one month’s supply of surplus food; I shaved. Bonnie came home empty handed because distribution wasn’t to start til 1 o’clock. Just as we were finishing lunch, the service man arrived, and we went to the church. A minor fault in the thermostat which he corrected easily. I was able to devote part of my afternoon to reading in Albright. We fixed supper about 5:00 (Bonnie had succeeded in getting the food early in the afternoon), then prepared to leave. We left the house, all three of us, about 6:20. Drove to Lynn, to Don McGaw’s house. He had invited us to come hear his Lenten concert-vocal recital. We got to his place shortly after 7:00—sat around for a few minutes. He had arranged for a sitter to stay with Debbie—who arrived just as we did. The program at the church lasted from 8:00-8:45. But there was a sit-down reception following. We didn’t get back to Don’s house until about 10:15. We stayed for a while, relaxed, listened to a tape of the concert—part of it. Left about 11:30. Came home, went straight to bed. c. 12:30.

Yesterday evening had been strenuous, so didn’t make it out of bed til about 9:30. Started bath water, and also started working on the letter to the congregation re: Bishop Mathews’ visit—it was all written, but I began typing the stencil. But I bathed, and then finished it. Also typed two stencils with facts on the Fund for Reconciliation—for both sides of one sheet. Didn’t finish all the mimeographing until about 12:30. Went to the church to turn on the heat for the rock group to practice. Came home, had lunch—Bonnie had to leave about 1:15 for her regular doctor appointment. I tended to getting Debbie away from the table and down for a nap. Then I sat at the dining room folding table, stuffing, sealing, stamping—getting the mailing ready to go out. When I finished that I read for a few minutes to relax, then went to the Post Office—and stopped in to the church briefly to look in on the group. Came home, got back to reading until about 5:00. Then began working on supper. We ate about 5:45 or 6:00. Read through the paper—Both in the Times and in the Eagle there was good coverage of the Bishop—both printed the pictures which I’d given them. Good articles too (I wrote the one in the Eagle!) watched CBS news, etc—did straightening on my desk while this was going on. Read until 8:30 when Ironside came on; watched it, snacked; then back to reading—all reading today has been in Albright FSATC. Read til about 11:15—in bed—LO c. 11:15 Θ. 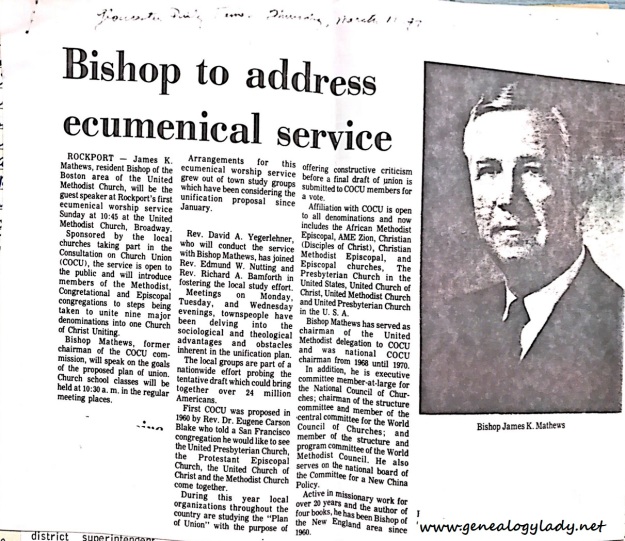 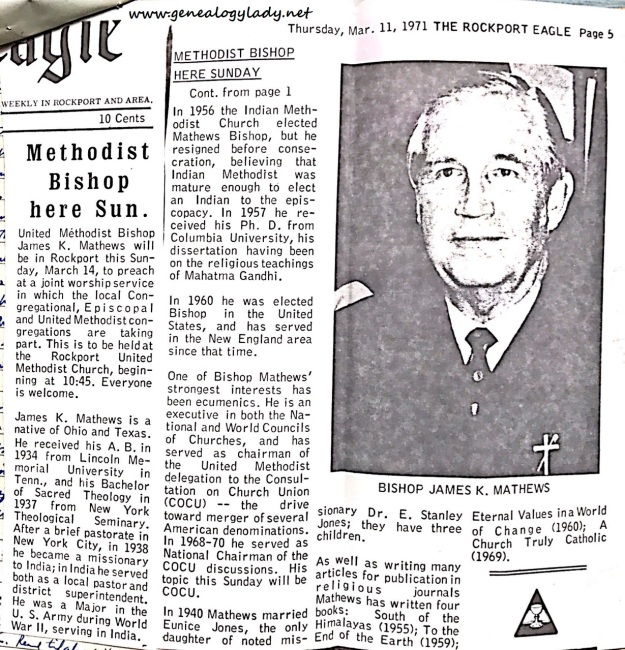