The mumps infection has not left me entirely—last night I had very painful left jowl—one sore spot just below the ear. This woke me up about 4:45. I got up to take a Darvon—also took time to write the Invocation and Benediction to be used in the service this A.M. I went back to bed about 5:30. Got up later—about 9:30, after getting some sleep. I had breakfast, shaved, then about 11 o’clock headed down to t-wharf. I found Margaret Reilly there, so I had someone to chat there while waiting for things to get started. Finally all the bands and groups marched up—and I did my thing; it was a very short ceremony. I don’t think I’ll be in Rockport enough more years to be invited again—which please(s) me. Came home—an insipid letter from Earl Landgrebe answering my letter on Vietnam. Typed more of my rough draft of doctrinal statement—had lunch, worked further in the afternoon. Bonnie feeling miserable with her period, Debbie slept. About 5:00 I gave Debbie her “lunch”—then about 6:30 we had our supper. In the evening I did more composing and typing on the doctrinal statement. Called the Folks; their 41st anniversary. From 9:00-11:00 we watched movie on TV: I’ll Take Sweden—a mediocre comedy—but fun. Finished the doctrinal statement about 11:00! Watched news, bathed, watched few minutes of Johnny Carson; OBLO 12:10.

Up after 9:00. While I was eating breakfast Margaret called. She’d had more talks—on the phone—with Alan. Maria is on her way back. The main concern of my morning was to put my two ordination documents into final draft form for typing. I got this done essentially in the morning. Late in the morning Bonnie took Debbie and went over to see Carol Lewis. When they got back she fed Debbie and went to work. I was occupied getting my study straightened up. I had a simple lunch early in the afternoon, then began working on my lesson for Bible study tonight—on the pseudepigrapha. [1] About mid-afternoon I got very sleepy—so I took a nap. My left jowl isn’t as sore today, but I still am on sulfa. Late in the afternoon I got up, read the newspaper, tended to Debbie. When Bonnie got home from work I helped with supper. We had supper, watched CBS news. The Bible class arrived at 8:00. 7 in attendance besides Bonnie + myself. The discussion following was lively, re: generation gap, sex, communism, Vietnam—I still remain baffled how Xns can tolerate the Vietnam war—it is so overwhelmingly evil and morally outrageous in my sight. Bonnie and I had a snack—I began typing on my ordination sermon; bathed at 11:30; watched Johnny Carson; OBLO, 12:45.

Up shortly before 9:00. Shaved, had breakfast. I had to be at the funeral home by 10 o’clock to read the service for William Lamar—only 2 friends were there. After this was finished I went to see Homer and Sarah, had to confer with them briefly. Got home about 11:00. I then read some in Newsweek, also did more typing on the ordination sermon. Didn’t have lunch until around 1:00. Then Bonnie went off shopping. Debbie played in her room, I typed. Again—as yesterday—about mid-afternoon I became sleepy—but napped only a few minutes. I then went about reading through my theological statement one last time, revising, refining, polishing. I got one page typed before supper, but discovered one major flaw—so the whole page would have to be done over. Had supper about 6:00. At 6:40 I picked up Gladys Haskell at her home, we went to Wesley Church for a nominating committee meeting to select a slate of officers for C.A.M.P. for next year. This was over by 7:30. I took Gladys home, then stopped to see Jean Crowell, to ask her to serve on the committee. I got home, did some phoning, retyped page 1. The[n] 9:00-11:30 watched a movie on TV: Mr. Hobbs Takes a Vacation—a comedy with Jimmy Stewart which I’d seen some years ago. Watched a few minutes of Johnny Carson; then more typing; bathed, OBLO 1:00 AM.

We found ourselves still in bed at 10:00. I had a quick breakfast, then got to work typing—my main concern for the day has been to get the Theological Statement for ordination as nearly done as possible. As of now—12:45 (Fri AM—at night) I have 16 pp typed—it will be about 20 pp. long. I worked on this until our late lunch—shaved before lunch, about 1:00. Then back to the typing—Bonnie went grocery shopping and took Debbie along. I continued typing. About 3:15 I stopped, cut some lilacs for Lucy Patience, then went to see her; I hadn’t called on her in many weeks. I stayed until about 4:15, came home, had a small snack—then back to the typing—until the newspaper came, which contained the letter which is attached to this page—Alice Marr’s reaction to my last two sermons. [See below] I can’t say that I was upset, but it is rather stunning—and distracting—it was hard to keep my mind on other things. We had supper about 6:30, watched CBS news. At 7:30 I returned to typing—had a phone call from Rev. Bamforth re: Alice Marr’s letter—he wanted to assure me [of] his support and encouragement. 8:30–10:15 we spent with Patriquins. When we came home I returned to typing—worked til after 12:30. Stopped to bathe; OBLO, 1:20 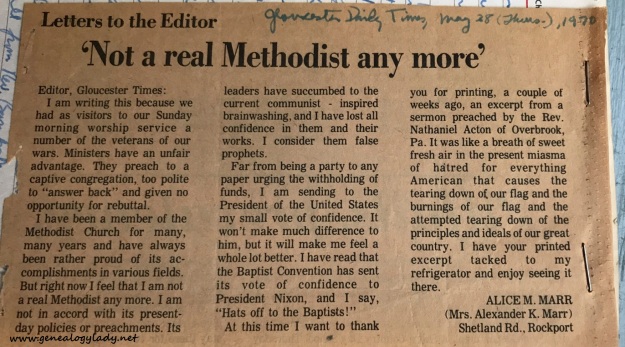