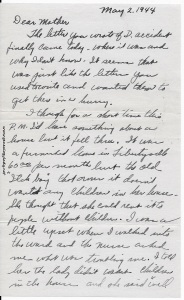 The letter you wrote of D. accident finally came today – where it was and why I don’t know. It seems that was just like the letters you used to write and wanted them to get there in a hurry.

I thought for a short time this PM I’d have something about a house but it fell thru. It was a furnished home in Libertyville $60.00 per month but the old “Itch boy” that owns it doesn’t want any children in her house – She thought that she could rent it to people without children. I was a little upset when I walked into the ward and the nurse asked me what was troubling me. I told her the lady didn’t want children in the house and she said “well

[page 2] why?” and that was a little to much – I told her the baby would “pe” on the bed. That slowed her down and even brought color to her face. Probably to mine also. Hope the lady who owns the house has splinters in her pants and one of them point starboard every time she sits down. Maybe there are other punishments just as bad but I won’t whish wish them on her at present. Dr. Glick put me wise to this house.

I’ve got my leave started on the way and should be able to give you the dope tomorrow night. Joe gets off or rather will take off at noon on Sat. and I’m going to try to do likewise. It may not go thru for 12:00 or for that matter maybe not for 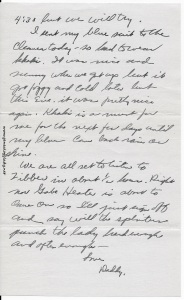 I sent my blue suit to the cleaner today – so had to wear khaki. It was nice and sunny when we got up but it got foggy and cold later but this eve it was pretty nice again. Khaki is a must for me for the next few days until my blues came back, rain or shine.

We are all set to listen to Fibber in about ½ hour. Right now Gabe Heater [1] is about to come on so I’ll just sign off and say will the splinters punch the lady hard enough and often enough –

[1] Gabriel Heatter was a radio news commentator. During WWII, he was known for his trademark phrase “Good evening, everyone…there is good news tonight.” 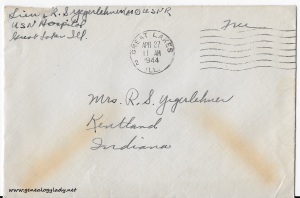 I’m all alone tonight – I mean Joe is on duty and I’m in my room alone – I hear others moving about in the house but I’ve been working on my correspondence course so have been busy.

I didn’t get a chance to go to the Lounge this eve so did not get your letter but will get it the first thing in the AM. I’ve been writing correspondence and seemed to have gotten into the habit of writing small and close together. That’s a mistake because I’ll have to write too much or use fewer pages.

Today at noon I sat down at a table and there were 3 strangers and in the course of the self introductions one fellow said his name was Glick and when I gave mine he was very surprised and gushy. He loudly and proudly announced to the other two that I practiced in his home town and that I had been practically around the world, etc., since joining the Navy – said he had kept in touch with me thru his Mother since I joined the Navy glub glub. He invited and half pushed me into the dental Dept. after the meal to have a talk. Really he is or seems to be a very fine individual with much common sense, etc.

I got another call from the housing today. She had another house – from the description on the phone it seemed a miniature hotel lacking only mail service and elevators – $250 per mo. I wasn’t interested. She did say she thought there would be some good Lake properties open in a short time and I’m going to try to get Joe interested. At present he just doesn’t seem much interested because he doesn’t want a house until the last of May.

All the places ask about children and their ages, etc. You know it’s funny how people feel about how destructive other people’s children are. We would hate to rent our house to a family with a bunch of mean brats that would hack and hew the furniture, the

[page 2] decks, the bulkheads and more destruction too numerous to mention. Now take our children. There is John – he’d probably hammer the stranger’s piano out of tune not to mention the scratches his feet might make keeping time to the music, and also probably dribble and splatter around the head – he being tall and his aim not good – for that matter Mark might splatter a little because he aims and fires before he can get a good look at the whites of their eyes – of course little D. would just scatter his period head or no head and I mean way ahead. John might also would not reshape chairs, davenports, etc., from the contortious positions he assumes while reading. Shrubbery, lawn, etc., would never suffer due to Mark and his outdoor activities, nor would walls be darkened by his hands which he always cleans before coming into contact with clean walls, linen, etc. David I know would never pick up a pencil and write or mark on anything or object – too busy sucking his thumbs. Maybe I’d better stop analyzing my offsprings but books have been written on less subject matter than I’ve put forth but I’m not a book writer.

I’m partially out of my trance now. I do hope I can find something in the next two weeks because I don’t like living this way. This is too near too far. I’d just about as soon be out of the country when you are so near but so far. I’m not making that too plain but I hope you can read between the lines.