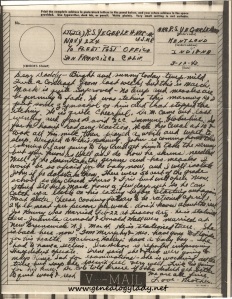 Dear Daddy – Bright and sunny today – temp mild. Quite a contrast from last week, but this is March. Mark is quite improved – no temp and measles are beginning to fade. He was itching this morning so I put some zymochol on him and that stopped the itching. He is quite cheerful. Dr. M. came out last evening and gave David 2 c.c. Immune Globuline. So far he hasn’t had any reaction. He ate his cereal at 10 & took all his milk then played a while and went to sleep.  Weighed 16 ¼ this morning. John is coming home this evening. I am going to try and get him to take the serum but you know as well as I do how he shuns needles. Well if he doesn’t take the serum and has measles I won’t be so afraid for the baby now, and I will isolate John if he does take them. There were 56 out of the grade school so they closed Thurs.  Fri but will open Mon. I think I’ll keep Mark home a few days yet so he can catch up a little on his eating before starting out again. Meat Butter, cheese cooking fats are to be rationed April 1. 2 ¼ lb meat per person per week – don’t know about the rest. Joe Kenny was married Feb 22 at Tuscon Arz – he is stationed there – Juanita Arnold & Donald Hall were married at New Brunswick N. J. Mar 4. He is stationed there. She is back here now. Tom Murphy & Mrs. have gone to Flordia for his health. Marlowe Haileys have a baby boy. She had to have a section. Ira Dixon is reported improving. They didn’t operate. Irene said she & Link were going to Mayo Clinic Sat for examinations – She is working all the time but says she doesn’t feel very well. Link is going for his knee. Dr. Cole told Irene if she didn’t get better to quit work & rest. We are all fine.