Since I do not have the time to spend on book writing until the end of this month, I have been using my spare minutes to work on some of my DNA puzzles. I have had lots of genetic goodies land on my doorstep so far this month. Here is one of them.

One mystery in my family tree is the parentage of Sarah Ann Jewell. She was born in Kentucky and later moved to Greene County, Indiana, where she married George Rea on 13 March 1842. Now presumably, my sweet young Sarah Ann did not travel from Kentucky to southern Indiana by herself. In the first half of the nineteen century, Kentucky and Indiana were still considered frontier states. Sarah most likely arrived in Indiana with her parents or other family members.

After combing through census records and other various limited records available online (Greene County does not have a very strong online presence NOR does it have many microfilms available from the LDS library), I determined that there was only one Jewell family in Greene County in the first half of the nineteenth century. The patriarch was Samuel Jewell: a miller by trade and an Irishman by nationality. Born in Ireland around the time of the American Revolution, he immigrated to Virginia where he married Rachel Painter on 31 December 1798. They soon moved west, living in Ohio (1820), Kentucky (1830), and finally Indiana (1840). Samuel and Rachel had at least three sons who followed them to Indiana: John, William, and Isaac.

So my next puzzle was to determine which of Samuel’s sons was Sarah’s father. Isaac was eliminated by pure logic. He was born in 1815, only ten years before Sarah was born. For the same reason, William was too young as well. I have come across several unsourced family trees over the years which claimed that William was Sarah’s father. William was born in 1812. He was too young to be Sarah’s father. (Another reason why one should not trust unsourced family trees!) William married his wife, Mariah Miller, in Shelby County, Kentucky, on 9 November 1835. This left John P. Jewell as the only potential candidate.

John Painter Jewell was born about 1800 in Virginia. He married Mary Hoagland, on 18 October 1820, in Bullitt County, Kentucky. Three nods in John’s favor! John was old enough to be Sarah’s father; he married his wife before Sarah’s calculated birth year; and, he had lived in Kentucky.

John was enumerated on the 1830 census in Greene county. Among his household were two girls between the ages of 5-9 (remember this for later!). Unfortunately, only the heads of household were enumerated by name. Sarah died relatively young, perhaps in childbirth. She did not live in the time of compulsory death certificates. Luckily, a transcription was made of her gravestone in the mid twentieth century. I do not think it survives as I have yet to find a willing Find A Grave photographer to capture her stone. I am still working on locating a will or land records for John Painter Jewell in Greene County, but I have been unsuccessful thus far in gaining access to the records. (If you know of anyone who is willing to do ‘on the ground’ research in Greene County, Indiana, let me know!)

So this mystery has remained at a standstill until now. A few months ago, I was contacted by another researcher who was looking for the parents of his ancestor Rachel Jewell of Greene County, Indiana. He had also come to the conclusion that John P. Jewell was likely Rachel’s father, which would make my Sarah and his Rachel sisters. After several conversations back and forth via email, I finally convinced him to do DNA testing. His results came back this week. The disappointing news is that he does not match either my father or me. However, he does match another cousin on this same branch of the family! 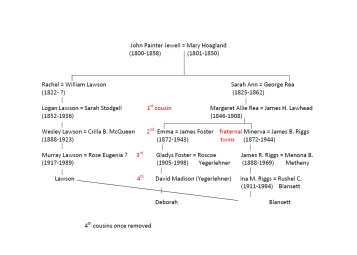 DNA is fickle. The predicated relationships that the DNA companies come up with are just that….predictions. They are based on a mathematical algorithm. In theory, a person inherits 50% of their DNA from each parent; 25% from each grandparent; 12.5% from each great grandparent; and so on. By the time one travels back in time to their third great grandparents, the potential inheritance is only 3.125% per individual. There are 32 individuals in the third great grandparent generation. Even though my father and Mr. Lawson are likely 4th cousins, there is no guarantee that they would inherit the same 3.125% from either John P. Jewell or Mary (Hoagland) Jewell.

The DNA lesson that I would like everyone to take away from this story is the importance of testing as many people in your family as possible. DNA is NOT inherited equally. Had my 3rd cousin not already tested, I would have assumed that my new cousin, the descendant of Rachel Jewell, was not related to me.

Well, this update is not about the book because I am on book hiatus until the end of October. [Insert crying face emoticon here] I have too many other projects on the stove cooking at the moment to devote time to the book. I am frustrated by this lack of time. I want to be able to focus on the book completely instead of stealing a moment here or there. But the time just is not there at the moment, and I have to be realistic.

My main focus is writing my proof argument for my ProGen Study Group. The first draft was due September 25th which I turned in a few days early. After I wrote mine, I had to review the four papers of my group mates. We have such different writing styles and research problems. It is great to see what we are all working on. This next month we have to take the comments and suggestions of our group mates and polish up our first drafts into the final arguments.

I chose a research problem which I have been working on for 20 years, since I first starting working on Gladys’ family. One branch of her family has Quaker ancestry which stretches back to the early days of Pennsylvania and William Penn. Due to all the various migrations across the eastern part of the United States in the early years of the nineteenth century, some records are non-existent. The purpose of a proof argument is to gather indirect and direct evidence together in one place, and to write an argument “proving” whether or not events occurred. In my case, I have been searching for the parents of Alfred M. Dicks, Gladys’ great grandfather.

I believe I have a very solid argument. My first draft was 18 pages long, and over 6,000 words. I received some good feedback from some of my study group mates, and now I am beginning to make some corrections and additions. It is also my plan to publish the argument as an eBook when I am done in October.

In my genetic genealogy work, my father’s mtDNA results came in last week. I have two exact matches, but I think they are several generations too far away to help me at present. Mitochondrial DNA is the type of DNA which was used to prove that the bones buried under a parking lot in England belonged to Richard III. My goals are a little less lofty, but no less important to me. I am hoping to prove the connection between Sarah Ann (Jewell) Rea and her parents with mitochondrial DNA. The most plausible candidates are John P. Jewell and his wife Mary (Hoagland) Jewell. My father’s haplogroup is H1g1. This haplogroup appears to be more common in Germany and the Northern European countries. If Sarah’s mother was Mary Hoagland (who was of German ancestry), and I can find another of Mary’s descendants who matches, then I may have solved this mystery.

Last night, as I was searching for more information about Crawford and Clark counties (in Illinois) where Gladys’ family lived, I discovered that the Marshall Public library has begun digitizing the local county newspapers, back to the 1850s. This is AMAZING news! I have been stymied by the lack of records access in these two counties for the last two decades. I finally had to step away from the computer at midnight, but I could have gone on for hours more. The website says that they are still scanning and adding more newspapers, so patrons should check back often! [Can you see me doing Snoopy’s happy dance?] I was able to find the obituary of Gladys’ great grandmother, Belinda C. Foster, which previously I had only been able to find in a transcription, and many other little tidbits of gossip about my ancestors.

I will leave you with a small sample from the weekly news gossip column of West York, Illinois, from March 1896, announcing the marriage of Gladys’ parents.