Yours of Jan. 29-30-31- & Feb. 1 came today so I feel like writing a long newsy letter – however I won’t promise too much. John is out in the kitchen making preparations to bake a cake. Mark is in the nursery working on the floor with steel wool – David is asleep. He almost went to sleep in his high chair while we ate – He of course had been fed. He still needs help – spills so much on the way. He woke up last night before I went to bed and didn’t seem to feel just right so I put him in bed with me. I think he had a little tummy ache – I could hear gurgling noises, and he would waken after dropping off to sleep but finally settled down. This morning I said I felt like I had slept with one eye open.

[page 2] We are still snow bound. The back yard has drifts in some places feet deep. I want to take a picture of it this afternoon. Would like to put D. out I the snow for a picture but it is too cold to take him out. It was 1 below in Chicago this a.m. at 8. It is supposed to be colder tonight. Our coal pile is getting low and we may have to resort to Ind. coal again for a while until the Coal Co. gets some “Milco.”

I rec’d a valentine card from Jim. It had a stamp size picture of Jim for signature. The card has a picture of a little yellow haired girl with cubby legs watering the family tree – The verse is “There are a lot of Family Trees, Some pretty nice ones too. But there’s on other Family Tree, That’s grown a peach like you.” The boys were discussing the card and Mark

[page 3] said, “Mother you didn’t look like that when you were a little girl, look this girl has fat legs.” So much for my pins.

I finally got the kitchen washed after three hitches. The paint is beginning to show wear in spots from so much washing, but on the whole it still looks as good as new – nice & shining & clean.

I see in the paper that Blanchard Childress and O.E. Powell are new Rotary members. Also that June Swihart Wedgbury has a baby boy – She lives in Remington. Speaking of Remington – They have a Dr. now who doesn’t have a car and charges $5.00 a call when anyone gets so ill they can’t go to the office and the Dr. has to walk abroad in the town – of course a country call where taxi service is necessary costs $15.00 – You can guess he doesn’t have many calls. There was a woman Dr. there but she got married and is having a baby so had

[page 4] to retire from practicing at present. More local news is the election of officers by Chamber of Commerce – Bill Zimmerman, Pres., Chafee Shirk, Vice, and Ed Johnson, Secy., Harry Healy, Treas. The C.C. has decided to transfer the sponsorship to the Rotary Club, of the Boy Scouts. Chet Van Scoyck has been acting as leader due to lack of anyone else willing to assume the roll.

After all the “steel wooling” on the floors this a.m. I am going to have to dust – an endless job, but has to be done once in a while. I can see webs stretched around in different places so will have to swing the wall brush around, too. Getting Mark to keep at a job is a job in itself – I can hear him turning the pages in the new Colliers and know he has deserted his work. I will finish this and go and inspect his work, which I am sure isn’t finished. He wants to go to town and I’ll let him go so he can mail this – 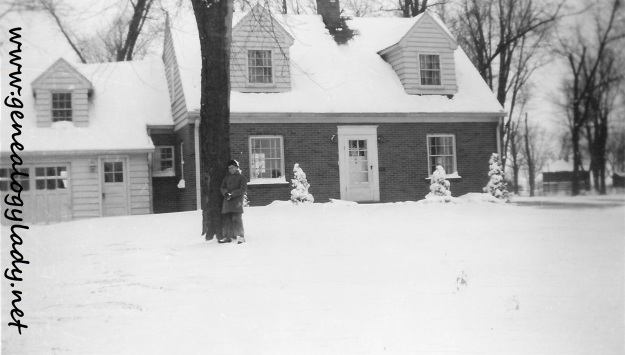