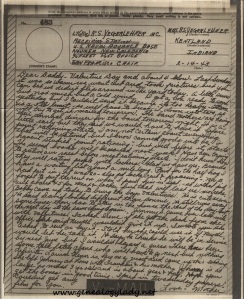 Dear Daddy – Valentine Day and about 4 below. Last Sunday it was so warm we went out and took pictures but you can bet we didn’t flip around in the yard today. A little snow but not much but a cold wind. I got a box ready to send yesterday but I couldn’t send it because it’s too heavy. There is a 5 lb limit – so will have to break it down into two, so will try to get it mailed tomorrow. The band mothers are having their annual dinner for the band tomorrow night. It is a little early but they said we would have to have it before point rationing starts. I am not certain about everything that will be rationed but I know canned goods will be. I haven’t studied “point rationing,” but will before it starts. The second books will be issued next week. Have been trying to ration our meat before meat rationing starts. I don’t know how they will ration people with lockers. Glad we have one. Brands have a waiting list about a mile long. Paid for the half hog I had put in – it was $20 – also pd locker rent & processing – Mr. B. forgot to put the rent on when I paid him in Sept. – so withal pd. out about $45 for meat & locker but that will last us months. Bobby came up today to bring the boys valentines. He is cute as ever. He said David looked different than Donnie. He still runs away sometimes then has to stay in the house the rest of the day but the next day it’s the same thing again. Jimmy S. came over last nite with valentines. I asked Irene if she got the desk from the office. She said Newell wouldn’t give it up. I wrote you she asked to rent or buy it – I told her she could use it if Newell would let her take it. He says he things he will be in Service by next June but I wouldn’t hazard a guess. There has been some talk lately about who will have to go next but nothing definite. Louise Glenn is here on a visit and came up this evening. She left Johnny at home with Franklin & his mother. Johnny is as large as most 3 yr olds and is about year & half. Hope you get the bones in good time. I put in two Sunday papers. Couldn’t get any film for you.