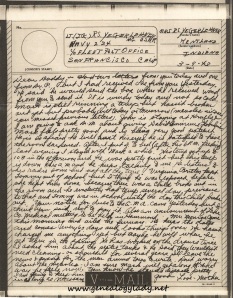 Dear Daddy – Had two letter from you today and one from Dr. P., but I had received one from you yesterday. He said he would send the box when he received word from you to send it. It is windy today and not so cold. Mark is still running a temp. but hasn’t broken out yet but probably will today or tomorrow (measles in case you missed previous letters). John is staying at Krulls & I am going to ask Dr. M. about giving David Immune Globuline. Mark feels pretty good and is being very good patient. He is so afraid he will hurt is eyes he is satisfied to have the room darkened. After I put D. to bed (after his 6 P.M. feeding) last evening I stayed with Mark a while. His temp got up to 103 in the afternoon and he was pretty quiet but his temp is down this a.m. and he keeps talking to me. He listens to his radio some but not all the time. Virginia Britton kept Tommy out of school, but I think he was exposed before she kept him home because there was a child broke out in the room and he evidently had temp several day previous to that, and Tommy was in school until the day this child broke out. Your notice for dues to the A.M.A. came yesterday but I think you said not to pay it. Also an announcement of Lake Co. Medical meeting to be held in Hammond. Mr. Monroe came this morning and oiled the furnace. He keeps the dates and comes every 60 days and looks things over. He hasn’t charged me anything yet but maybe he will when he get thru in the spring. He has worked on the drains twice. I asked him about the septic tanks & he said they wouldn’t need cleaning – or shouldn’t for several years. I’ll leave the news & gossip for the men around town to write. Don’t worry about the measles – I am sure Mark will get along OK the way he feels now. You know he stands diseases pretty good. I am going to keep him in as long as necessary.