Dear Daddy – Two letters came this morning – but they were older by a few days than the four of yesterday. With getting yours of Apr 15 yesterday I felt pretty well up to date – – It is a grand day – just like May as we think of it – after all the weather we have been having. John Barce & a Walkup boy are going to take the storm windows down tomorrow. It has been too cool so far – maybe yet but I think we can chance it. I worked out in the yard yesterday – getting flower beds ready. Mark worked some in the garden pulling wild parsnips. There is quite a few and I thought pulling would be the best way to eliminate. Bun Walkup hauled the trash yesterday – He is always comparing their girl to David – as you know D. is just a few hours older. Their girl was quite a bit larger at birth but they are both the same now. D. is taking a little nap now. He looks like he is about to get a tooth, but none yet. Will try to get a good picture of him today – it is so nice out. Arlene got back from Green Bay and wants me to go to Club, but I would have to get someone to keep D. and I think I would rather stay home and work in the yard. Rec’d an invitation from St. E. to attend Hospital Day Ceremony given in honor of their Doctors n the Armed Forces. It is next Wed. (May 12) so think I’ll plan to go. – Louise O’Brien is going to be married this month so Arlene will lose her. I think I’ll go to T.H. about Fri and get Mother. Mark is waiting to take this as he goes back to school so must hurry. 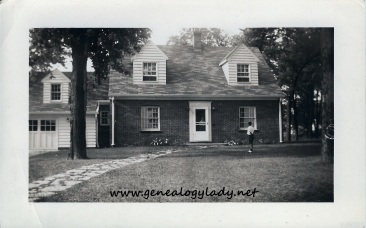