It was late when I got to bed last nite and I was so tired from yesterday’s goings. I fed David about 6:30 – he would want to wake early – then we both went back to sleep and I was just up getting dressed when the mail main came and brought 4 letters, June 26-27-28 & 29. Now I must call Mrs. R. and tell her you & Joe have been together but she probably has the word from Joe. I promised her I would come over & see her when I visited Ruthie P. in the hospital but

[page 2] with Mother being down and the boys gone last week I didn’t get over to see Ruthie and now she is home so I’ll just call Mrs. R. until some later date when I can go over.

Mrs. Zell just came over and said we could have green beans – ours aren’t quite ready yet. They have kolorabies [kohlrabi] in their garden. Also are raising okra – if I remember correctly you didn’t care for okra.

[page 3] again – but I remember when I was powdering him yesterday after his bath. I accidently got some in his eyes – so I think that must be the cause. Now don’t worry about it he is OK now. At present he is trying to get hold of a rocking chair beside his bed – He is always trying to reach something. Betty Lou took some pictures and if I can get them will send them today. I think Nick has given up the enlisting idea. Haven’t heard anything about it lately and they are doing some work on their house – putting in a bathroom downstairs and

[page 4] remodeling their kitchen. They are still driving their car. It looks about like it did when you left. He gets more gasoline than we get (a card) because of his business. He has a locker in Sheldon and has to make several trips a week to get meat.

I sent you a financial statement the first of the month but will tell you again – I at present have $91 – but that includes 52⁰⁰ Mother gave me and the 52⁰⁰ will probably go to the hospital when I pay her bill down there – but the Hancock Ins. is paid for this time (3 policies) and all bills except 10⁰⁰ at Loebs and a small bill at Bairs are paid – So I really have a bal. of about 39⁰⁰ – I have to write Jim & Glen, your Folks & Ruth about Mother – 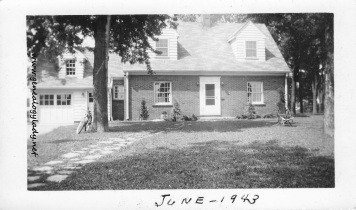