Dear Daddy – Yours of Feb. 3 & 4th came today – also Mark’s birthday letter. You letters made a good valentine – however your presence would be better but maybe it won’t be long. Mark was much pleased with the money order, but said it would be better for you to come.

Since the roads are still snowbound in places there wasn’t any school today. There was more snow today so there probably won’t be school for a day or so. I was able to attend music club at Foulkes, since the boys were home to keep David. Mark stayed home – John went with me to hear the Opera La Bohème. We had never heard Foulkes’ phonograph and decided it didn’t sound much, if any, beter than ours. Of course they have a much more elaborate cabinet. Theirs vibrates when it starts to play so it sounded a little natural, because ours gets a hum or buzz once in a while.

We got some coal today ($22.43) from the Lbr. Co., $9.50 a ton, but it’s the best and incidentally the only kind our furnace wants to burn. I called Chet Harlan and he was completely out of any kind of stoker coal but has a load of “Milco” on the way and promised to send us some as soon as it comes which he says should be Thurs. or Fri. I’ll take it too because we will use it, in time. John went to the basement to take a look around and he says the new coal made a lot of dirt – If the boys are home a day or two I think we will try to clean up a little down there.

[page 2] The Music Club chorus came here to practice on a new cantata they want to give in March. Their pianist didn’t come so John played for them. John weighed this morning on the office scales, now in the upstairs bathroom, and he weighed just 100 even – 5 lbs. more than I weigh. He got out this morning and shoveled snow, then it snowed more and by the time the chorus arrived the walk was covered again. Bob Schurtter hauled the coal this afternoon and mildly “bawled me out” because we didn’t have the drive shoveled off. I just ignored him. He helps Chet out when he (Chet) gets short of help and needs truck drivers. He often works on Sat. or holidays. He will be in the Navy as an ensign sometime – probably before school is out – then he won’t have to haul coal, etc. I would predict before the war is over he will be glad to haul coal again. Maybe I am wrong. – What am I ranting about? Maybe I didn’t like it because he said what he did about having the drive cleaned off. Anyway we have coal again and that is the main thing.

Sorry your Christmas box was so mutilated. The chewing gum wasn’t very good but all I could get at that time. I did wrap those boxed with heavy paper & card besides using cigar boxes. I used the same boxes so I could wrap them better.

Mark is waiting to take this to town so must get it finished.
Love Mother 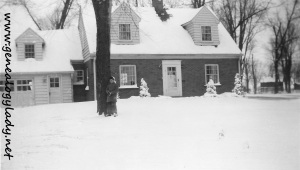