The fall David had Monday was minor compared to one he got this morning. I was upstairs and sewing in the little room. He would play around the machine then go into J. & M.’s room – was closing their door, etc. He came in where I was then ran into their room and the next thing I knew I heard a crash and ran in to see – He was lying under the radio. I don’t know how it happened, but he must have climbed up on one of the beds and then over to the radio and pulled it over on him. I suppose there was something on the radio he wanted. He sustained a jagged gash across the upper lip that took two stitches to close. The cut almost went thru. The inside was cut, both upper and lower but no teeth loosened. There was a small place on the left eye lid but not bad. I noticed this afternoon one finger on the left hand is bruised at the end. He was bleeding and crying and I couldn’t take him in the car by myself 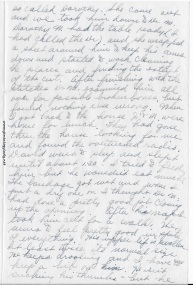 [page 2] so we called Dorothy. She came out and we took him down to Dr. M. Dorothy W. had the table ready (I had called the Dr.) and she wrapped a sheet around him to keep his arms down and started to work cleaning the places and finding the extent of the cut. After finishing with the stitches Dr. M. examined him all over for possible broken bones, but found nothing else wrong. When I got back to the house J. & M. were home for lunch. They had gone thru the house looking for me and found the overturned radio. David went to sleep and slept until about 1:30 – I tried to feed him but he wouldn’t eat much. The bandage got wet and when I put a dry one on I thought Dr. M. had done a pretty good job closing up the opening. After his nap I took him out for a walk. He seems to feel pretty good in spite of everything. His upper lip is swollen at least twice its normal size. He keeps drooling and I have to keep a bib on him. He isn’t sucking his thumbs – but he 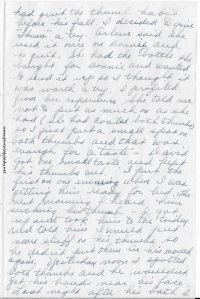 [page 3] had quit the thumb habit before his fall. I decided to give “Thum” a try. Arlene said she used it once on Donnie and he quit. She had the bottle she bought for Donnie and wanted to send it up so I thought it was worth a try. I profited from her experience. She told me not to put as much on as she had (she had coated both thumbs) so I just put a small spot on both thumbs and that was enough for a taste – David got one small taste and kept his thumbs out. I put the first on one evening when I was getting him ready for bed. The next morning I heard him sucking his thumb – I got up and took him to the toidey and told him I would put more stuff on his thumbs so he didn’t put them in his mouth again. Yesterday noon I spotted both thumbs and he wouldn’t get his hands near his face – Last night after his bath I 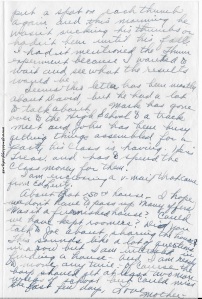 [page 4] put a spot on each thumb again and this morning he wasn’t sucking his thumbs or hadn’t been until his fall. I hadn’t mentioned the Thum experiment because I wanted to wait and see what the results would be.

Seems this letter has been mostly about David, but he had a lot to talk about. Mark has gone over to the High School to a track meet and John has been busy getting things assembled for a party his class is having. He is Treas. And has to spend the class money for them.

I am enclosing a V-mail that came from Ed Lentz.

About that $150.00 house – I hope we don’t have to pass up many offers. Was it a furnished house? Could we have kept roomers? Did you talk to Joe about sharing the house? This sounds like a lot of questions in a row but I am interested in finding a house – and I am ready to move anytime. – Of course the boys should get a least two more weeks of school but could miss the last few days.