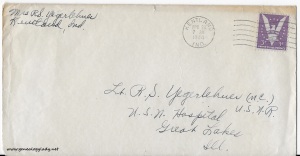 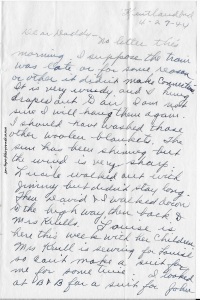 No letter this morning – I suppose the train was late or for some reason or other it didn’t make connections. It is very windy and I hung drapes out to air. I am not sure I will hang them again. I should have washed those other woolen blankets. The sun has been shining but the wind is very sharp. Lucile walked out with Jimmy but didn’t stay long. Then David & I walked down to the highway, then back to Mrs. Krull’s. Louise is here this week with her children. Mrs. Krull is sewing for Louise so can’t make a suit for me for some time. I looked at B & B for a suit for John

Dorothy is going to Laf. tomorrow and I plan to go. I am going to take David along. I don’t want to leave him with anyone with such a lip. He may get it bumped with me but I don’t want that to happen for anyone else.

Had a letter from your Mother. Eel river is out and the road north is under water. I suppose by now it is going down. Uncle Geo. had a stroke and Dad and the boys went up to see him. He is better now.

[page 3] John is at a wiener roast at school. He came home to get cokes out of the refrigerator and said it was so windy they were going inside to have their party. They had intended having it out on the grounds. I told him they should come over and use our fireplace and he reminded me that it is full of clinkers.

Mark wants us to have something “extra special” for supper since John is having a picnic supper. He suggested ice cream and make sodas. We have some cokes but I told him he could have the soda. I have had one coke today and I believe that is enough. Arlene had Donnie & Bobby in the wagon – had been to the filling station for cokes – and David and I were walking along and she asked me in for a coke.

[page 4] David wanted a taste but that was all. He kept saying words and they thought he was progressing very well in his talking. He closed the nursery door and Donnie said, “You’re bad.” They said he says that to everyone about everything. David made a puddle on the nursery floor (at home) and took me to see it. He has seen me mop up his puddles and thought that was what should be done.

Mark is wanting to go to town to get his ice cream so will let him go and mail this and get the paper.

Hope you have found us a place to live. Wish I could be up there to look around but you & Joe together should be able to find something –