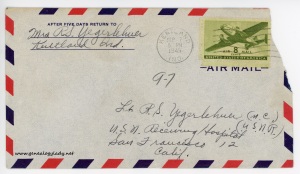 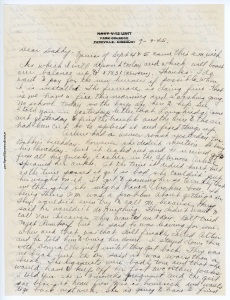 Yours of Sept. 4 & 5 came this a.m. with cks. which I will deposit today and which will boost our balance up to $578.31 (plus $47.00). Thanks – I do want to pay for the new burner if possible when it is installed. The furnace is going fine – that is we have a fire this morning and a washing going. No school today so the boys are here to help me. I told you in yesterday’s letter that Loughridge came out yesterday to find the trouble and the wire to the air had been cut so he spliced it and fixed things up.

Arlene had a wiener roast yesterday for Bobby’s birthday – however she didn’t mention it being his birthday – but it leaked out and he received gifts from all his guests. Earlier in the afternoon Arlene sprained her ankle. At the time it didn’t hurt, but as the time passed it got so bad she couldn’t put her weight on it. It got to paining her so terribly that we thought she might have a broken bone. It being Thurs. PM was a problem about getting a Dr. They wouldn’t even try to call M. because they said he wouldn’t do anything. They didn’t want to call Van because they wanted an X-ray. Bill tried to get Rumkorf but he said he was leaving for somewhere and that was that. Bill finally called Altier and he told him to bring her down. I stayed down there with Donna (the girl) until they got back. There was no break but the Dr. said it was worse than a break. The ligaments were badly torn and that she would have to keep off her foot two or three weeks. I told you she is 6 months pregnant and the girl she brought home from Wis. is homesick and wants to go back next week. She is going to have to find

[page 2] someone to help her. She told me the day before that she had been so terribly ill at the beginning of this pregnancy and that she had had to rest so much. She came near having a nervous breakdown early in the summer. I told her last night maybe it was a good thing this happened to her so she will get plenty of rest. She said she guessed the Lord was taking care of her so she would rest.

About the travel business. I haven’t given it much thought because of J. & M. being in school. I wouldn’t relish the idea of a trip but had thought if you just stay on & stay on David & I might come out However I think all these Drs. just like you are going to raise up in arms if something isn’t done, but fast. The only thing to do at the present time is to wait – but not too long before someone does something. It always looks darkest just before the dawn, to quote a proverb or something.

—Just stopped to hang up some washing. It seems hot out in the sun – I suppose we will have some warm days but it cools off in the evening. It is a good day to dry clothes, and since I am washing today that is quite important.

Your Reader’s Digest came today. I’ll send it with both local papers. If you don’t want me to send the papers or magazines just let me know. (Hope it won’t be necessary much longer).

I think the Bendix has stopped again, so will go hang out some more clothes.

—I went down to see Arlene and she was feeling better, tho still having some pain. Bill found a “maid” for them this morning, so that will help some. It’s the woman who did work for Mary & Bernard. Mary let her go – she was not pleased with some things and Arlene told Mary she couldn’t be so fussy in these times. Mary retorted “you sound just like Bernard.” Evidently Bernard had told her the same thing, but she let her go anyway. Mark is going to the Fair with Zells, but not until later this afternoon.