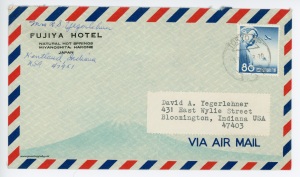 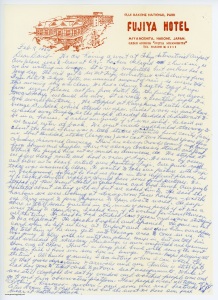 We are having a wait at Tokyo International Airport. Our plane was to leave at 6:30 – has been delayed 2 hrs. 15 mi., so we are waiting in lounge. It is very comfortable but we have had a long day. We did get to see Mt. Fuji several times while driving from Fuji hotel to Tokyo. After an unusual amount of rain – so we were told – this morning sky was clear. We had a chance to see the top of Fuji from several places not far from hotel, then the further we drove toward Tokyo we could see more. It is really a beautiful sight. We took several pictures. We stopped at Kamakura to see the large bronze Buddah which stands in open. Tidal waves in past have washed away temple, so the people decided Buddah didn’t want to be in a house. I asked our guide if it was solid – he said no we could enter at back. We went inside and climbed stairway to about the head. There was a little statue of Buddah inside head cavity facing us. That Buddah statue (large one) was cast two hundred years ago before Columbus discovered America. There are always crowds coming and going from shrines and temples. There are always concession stands and food. I think the people here eat as much as Americans do. We stopped at one place along the route and had a view of Fuji. We were by ocean and below us on beach artists were painting Fuji. Our guide said today was unusually clear. He wanted to take our picture with Fuji in background. In fact he had us pose in two different places, so if he clicked shutter right, we should have some good pictures. We stopped at New Grand Hotel in Yokohama and had lunch. Our guide hesitated about eating with us but we asked him to. He said the harbor we were looking at – dining room faces harbor – was the one Perry used to force Japanese to open door to world. He says there is still some question in the minds of some people if it was a wise thing to open door. I asked him if he worked for Travel Bureau all the time. He said he had studied law 3 years and is now studying to be a diplomat. He speaks English and Spanish. He gave us his card when he left us here at airport and we gave him our address. We told him if he ever gets into Chicago area to come see us. He was going to stay with us until our place comes in, but we told him that wouldn’t be necessary. This lounge is more comfortable and luxurious than any at O’Hare. There is a large fish bowl with some of the most exotic fish I have ever seen here in lounge. Music keeps playing all the time. All kinds of music. I am sitting where I can watch the TV that gives departures & arrivals and our Pan Am is still late. Dad has gone to ticket desk to get our seat assignments. While it was still daylight we sat by window and watched people come and go to and from observation platform. There people wear all types of clothing – Kimonos – modern – and some are real beatniks. A few women try to dye hair red but the most we have seen just wear it natural black.